In barely a week from today, the VIVO X27 mid-ranger will be official and all the furore about the mid-ranger which the company describes as the “first genuine full-screen mid-range smartphone” will be put to an end. A day after VIVO released a poster confirming the presence of a pop-up camera setup which gives more room for the front display with a traditional full-screen design with no notch, a new official teaser has revealed the Vivo X27 will launch in three variants including a Pro variant and two non-pro variants.

The poster also details the basic differences as well as the color variants that will be coming our way. Starting off with the VIVO X27 Pro, the leaked poster suggests the device will flaunt a larger  6.7-inch display with a 20.5:9 aspect ratio, while it will get the Snapdragon 710 processor coupled with 8GB of RAM and 256GB of storage. It is expected to come fitted with a 32MP selfie camera as well as a triple rear camera comprising of a 48MP + 13MP  and a third-night vision camera.

The more capable VIVO X27, on the other hand, will get a slightly smaller 6.39-inch display with a 19.5:9 aspect ratio, but will get the same the SD 710 AIE processor coupled with same 8GB RAM and 256GB of storage. In the camera unit, the device will feature a  48MP + 13MP + 5MP rear configuration and a 16MP selfie camera, while it will come powered by a 4000mAh battery with support for 22.5W fast charging same as the pro variant.

The most basic variant still will get the VIVO X27 moniker featuring virtually the same specs as the other X27 but will be powered by the Snapdragon 675 AIE processor that is paired with 8GB of RAM and 128GB of storage. It gets the same 4000mAh Battery, but with 18W fast charging. 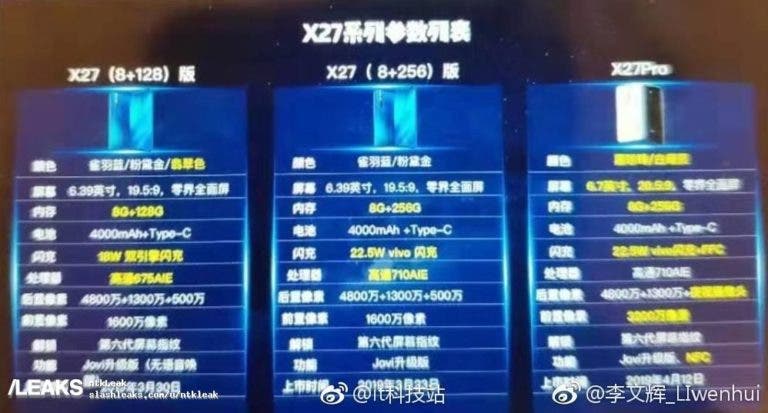 Next Huawei: US court has issued a subpoena to the US government