On March 7, we reported that Chinese manufacturing giant, Huawei, sued the United States government to court over multiple issues. Now, the US Federal District Court for the Eastern District of Texas had filed a subpoena to the US government and related ministers. According to reports, the subpoena stated that the US government needs to respond within 60 days after receiving the subpoena (excluding the date of receipt of the subpoena), otherwise it will be defeated by default. 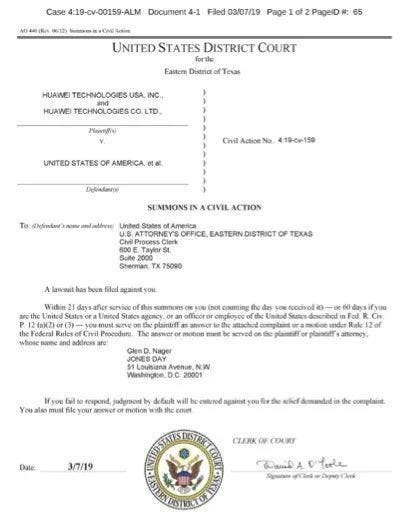 Earlier, Huawei held a press conference at its Shenzhen headquarters on March 7 to issue an important statement and decided to sue the US government. Huawei revealed that it has evidence that the US government is suspected of invading Huawei servers.

The United States government and Huawei have been at loggerheads for quite some time. According to Huawei, the US government has been smearing the company as a threat, attacking its servers, stealing its mail and source code, and never provides any evidence to support its allegations that Huawei poses a cybersecurity threat. To make matters worse, the US government is trying to prevent Huawei from participating in the construction of 5G networks in other countries.