Samsung mobile has a launch event scheduled for April 10. Although the location, time and event the probable product it will launch are until now well-kept secret, rumor spinners suggest the Korean titan might unveil some Galaxy A series smartphones as part of its effort to reposition the A-series after it rejigged the M series last month.

Now, weeks ahead of the April event, alleged renders of one of the anticipated devices the Galaxy A40 has surfaced online detailing its design from all angle. The Galaxy A40, when launched, will fit in between the Galaxy A30 and A50 which went on sale in Indi earlier this month.

The Galaxy A40 renders first obtained by Winfuture reveals a device with Samsungs Infinity-U display with minimal bezels, and it will likely be a Super AMOLED screen, similar to the Galaxy A30. The reverse side has a gradient finish with shiny surface fitted with a fingerprint scanner, and while it was earlier ‘rumored to get a tri-camera ‘system, the render shows a dual rear camera setup suspected to be the usual standard lens paired with an ultra-wide angle lens. 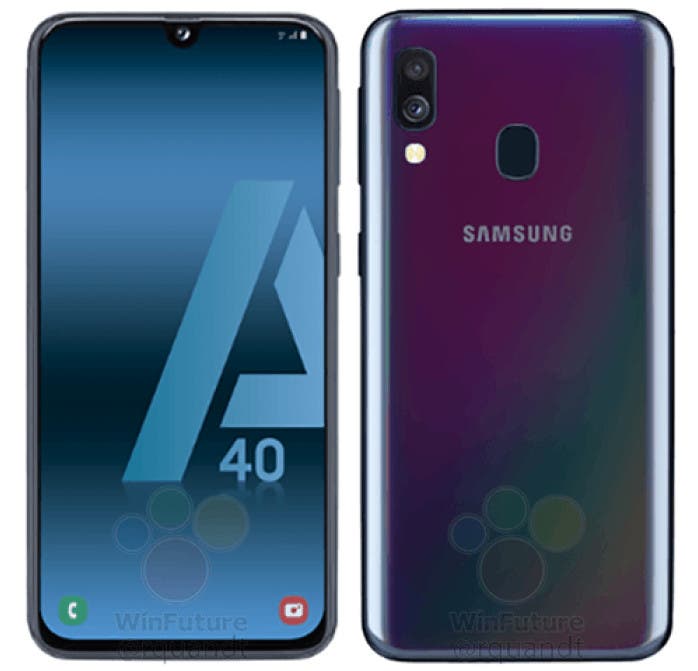 Away from the look, the Galaxy A40 is expected to feature a 5.7-inch display, Samsung’s in-house octa-core Exynos 7885 processor, coupled with 4GB of RAM, 64GB of storage, while a few other rumors have it that it will come with the Exynos 7904 coupled with 4GB of RAM. It will get a 4000mAh battery with 15W fast charging that charges over a USB Type C port, while it will boot  Android 9 Pie out of the box. A previous report pegged a larger 6.4-inch display and the octa-core Exynos 7904 processor. The A40 is tipped to arrive in black, blue, coral, and white, while there are indications it will sell for 250 euros (~$283).

If the Galaxy A40 gets unveiled at Samsungs April 10 event, it will most likely do so alongside the Galaxy A90, A20e and perhaps the rumored Galaxy A2 core.