In June 2018, when the Mi 8 series models were announced, there was another amazing product in face of the Mi Band 3. The latter is one of the best-selling wristbands on the planet. So when we heard the Mi 9 line smartphones will be uncovered in the first quarter of 2019, many of us were hoping the Xiaomi Mi Band 4 will be launched at the same time as well. Yesterday, David Cui, Yunmi’s chief financial officer, revealed in an interview that the fourth generation smartbands of Xiaomi would definitely be launched in 2019, but not in the near future. It’s expected to hit the market in late spring or summer. 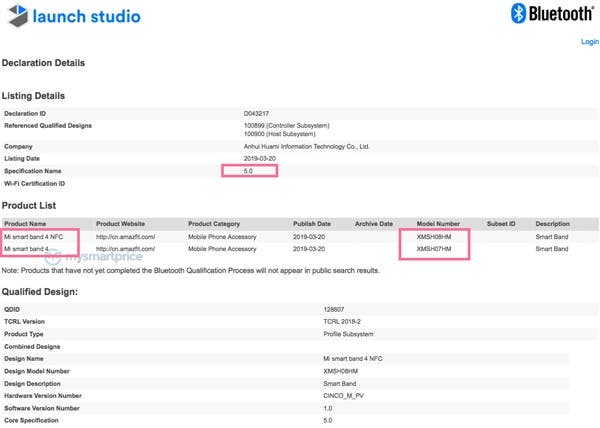 Today, it became known the Xiaomi Mi Band 4 passed the Bluetooth organization certification, and there are two models, including the XMSH08HM and XMSH07HM. Seems the former one belongs to the NFC variant, while the latter is the ordinary version. At the same time, the two bracelets also support the Bluetooth 5.0 protocol. This means the data transmission rate will be improved, the power consumption will be reduced, and the network distance will be expanded.

As for other functions, Cui Dawei did not reveal much, but he said that every generation of Xiaomi band will add some new health monitoring functions, and the fourth generation products are no exception.

The last year’s Xiaomi Mi Band 3 only supports the Bluetooth 4.2 low-power standard. According to the data, its sales reached more than 10 million units in less than half a year. According to IDC statistics, the global wearables market grew by 31.4% in the Q4 2018, with Xiaomi ranking second, accounting for 12.6% of the market. At the same time, Xiaomi is the number 1 wearable maker in the homeland.

Next Why Snapdragon 675-Powered Phones Have Different Pricing at Xiaomi and VIVO?