At a special event held today in Paris France, Huawei finally unveiled the Huawei P30 and P30 Pro confirming details of the various hardware that had been leaked leading up to the announcement. You can find the Huawei P30 and Huawei P30 Pro launch recap here. While the P30 was no doubt the major highlights of today’s event, the company did reveal some other nonmobile product including the Freelace Wireless earphones as well as the refresh of last years Huawei Watch active GT.

While last years Huawei Watch GT came in Classic and Sports editions,  Huawei today announced two more variants of the smartwatch dubbed the Huawei Watch GT Active and Huawei Watch GT Elegant. Both variants come with only a slight difference in design over the old models already on sales, and that include some slight tweaks to the body, new colors for the bands, and the same 2-week battery life.

The Huawei Watch GT Active edition features the 46mm watch face housing a 1.39-inch 454×454 AMOLED touchscreen as the Watch GT Classic and Sport, while the Elegant edition has 42mm face with a ceramic bezel option with a smaller 1.2-inch 390×390 AMOLED panel. The GT active edition much like the Sport and Classic editions boasts of up to weeks on a charge with heart-rate monitoring turned on for 90 minutes of exercise each week, while the elegant version, when used in similar mode, will only last up to 7 days, while that could extend up to 30 days when used as a more traditional watch.

New to both models is the Triathlon mode which supports open water swimming, outdoor cycling, and outdoor running, while it will record the entire triathlon from start to finish, including your transition times. The existing GT watch will get this as an update in the weeks to come. 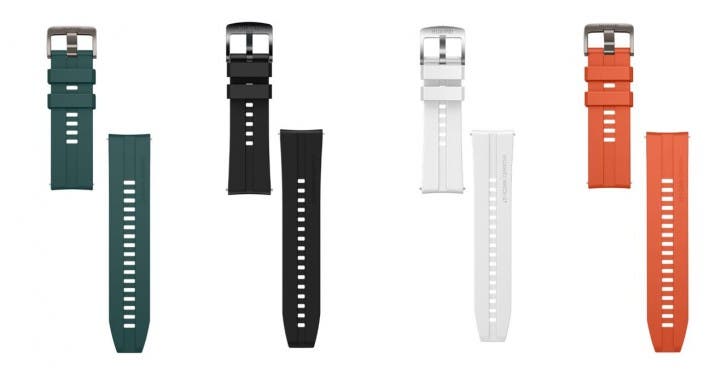 The Watch GT Elegant edition will hit the shelves in Magic Pearl White and Tahitian Magic Black Pearl coupled with black and white strap for €229 while the active edition will come only in orange and dark green for  €249.