The Huawei P30 and P30 Pro were announced last night. Today, they went on pre-sale in China. But the Chinese version (National Bank version) will be announced on April 11, and the official pricing will be announced at the event. So the current reservation is ‘blind’ in some sense. Even so, the data monitored by Tmall shows that as of 10:00 this morning, the P30 has renewed the pre-sales record of this retailer. The previous record belonged to the P20. But the new P30 series’ pre-orders exceeded the P20 10 times.

By the way, the top version of the Huawei P30 Pro has managed to completely sell out at Tmall in 5 minutes.

It is reported that this year’s Huawei P30 and P30 Pro still continues using the same design style of the previous generation but comes with an enhanced camera. Also, the P30 Pro sports a 6.47-inch 1080P resolution OLED curved pearl screen, of which the border is as narrow as 2.2mm. On the contrary, The P30 is packed with a 6.1-inch 1080P resolution OLED screen that also supports the P3 wide color gamut. 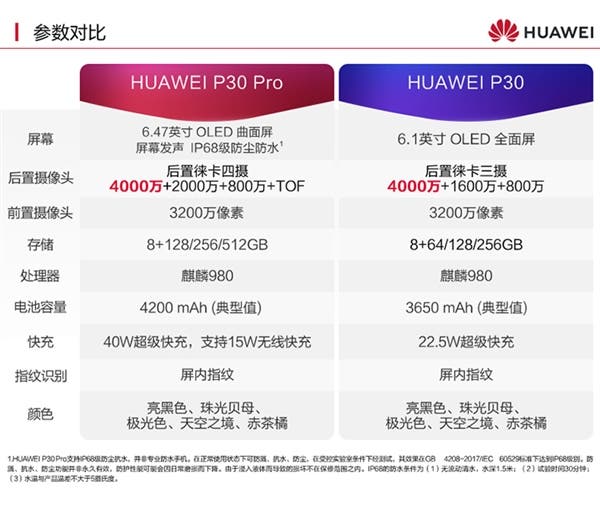 Anyways, the biggest selling point of the Huawei P30 series is the four-camera module. It’s the first Leica-enabled camera that comes with four sensors. They include a 40MP Sony IMX650 CMOS, the 8MP periscope 5x optical zoom telephoto lens, the 20MP wide-angle lens, and the ToF 3D deep-sensing lens. As a result, this phone topped in DxOMark, scoring 119 points.