The new Reno smartphone series from OPPO will go official on April 10, as per the company’s official teaser. We are still days ahead of the said date, and that means more window for more leaks and official teasers. However, reports from out of China suggest the OPPO is already accepting pre-orders for the upcoming device in China.

The pre-booking is available via multiple online retailers in China including the company’s official online store, Jingdong Mall, Tmall, Suning as well as multiple offline channels. You can benefit from OPPO’s trade-in activities in addition to a 500 Yuan (~$75) discount if you pre-order the device from now until April 18, while anyone who partakes in the pre-orders between April 19 and April 21 will be provided with a one-year screen breaking insurance worth 129 Yuan (~$19). We are not sure when the device will begin to ship, however, there are indications the first batch will ship out as from April 19, while pre-orders made between April 19 and April 21 could ship out, perhaps between April 21 until Month end. 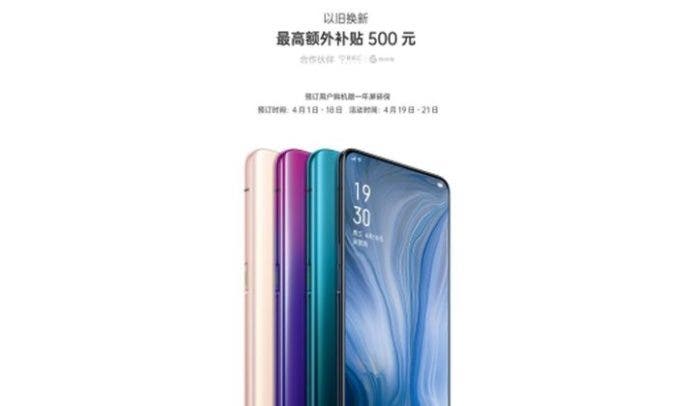 We have no concrete report on how much the device will cost in China, however, the poster above suggests we could get the OPPO Reno in fog sea green, black night mist, pink mist, and nebula purple color options.

Previous reports suggest the OPPO Reno series could be landing with some interesting features, perhaps the most interesting of which could be the unusual front-facing camera – the peeking shooter as well as the company’s 10x hybrid zoom that will be sitting behind the periscope lens. The Reno will come in several variants – OPPO RENO, perhaps dubbed the OPPO Reno Lite with the SD 710 sOc, Dual rear cameras, as well as a second variant with superior specs like Snapdragon 855 SoC, triple rear cameras, and a 4,065 mAh battery with 50W fast charging, this variant might arrive as the Reno Pro,

Previous Redmi 7 set to launch in the Philippines