Chinese manufacturing giant, Xiaomi, encountered a hard time in the production capacity of the Xiaomi Mi 9 series. In its early sales period, these smartphones were largely unavailable and this put the entire company on its toes. Yesterday, Lei Jun once again responded on Weibo saying that “the production capacity of Xiaomi Mi 9 has improved rapidly”. 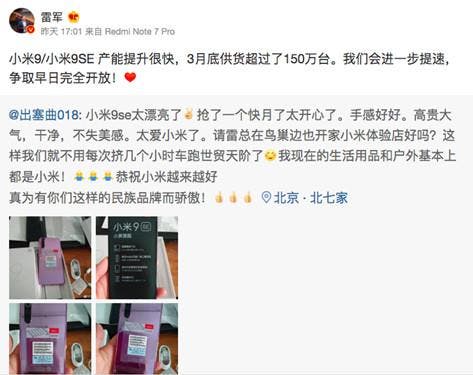 Lei Jun said: “The production capacity of Xiaomi Mi 9/Xiaomi Mi 9SE has increased rapidly. At the end of March, the supply exceeded 1.5 million units. We will further speed up and strive to open up soon” He also stressed that “the production in early March did encounter some difficulties, but we have solved it. Xiaomi Mi 9 is now available for everybody”

On April 1, Xiaomi Group disclosed that as of March 29, the supply of Xiaomi Mi 9 exceeded 1 million units, and the supply of Xiaomi 9 series mobile phones exceeded 1.5 million units. At the Foxconn factory launch, Xiaomi revealed that the current production line has been fully loaded with two shifts and can produce more than 1 million Xiaomi Mi 9’s per month. In terms of price, the 6GB+128GB version pf this smartphone costs 2,999 yuan ($446) while the 8GB+128GB version is priced at 3,299 yuan ($491).