We still do not know when Samsung’s next Android Go smartphone the Galaxy A2 Core will go official, however, a well-detailed render,  support section of Samsung’s website as well as a Geekbench listing of the phone, has already been outed, and now, we get the biggest leak so far.

The latest leak courtesy of 91mobiles coms with a new image, though of the front view which lines up with earlier leaked renders, with a pretty complete list of specs. from a design perspective, the Galaxy A2 Core isn’t expected to be as appealing as the two-digit Galaxy A smartphones, featuring a plastic design with a single rear camera, a 5-inch display with 960 x 540 pixels resolution, with a 1.6GHz octa-core Samsung Exynos 7870 processor humming under its hood. 91mobiles further reveals that the SoC will be joined with 1GB RAM AND 16GB of expandable storage options.

The source also states that the Galaxy A2 core will get a single 5 MP camera with an aperture of f/1.9, as well as a similar 5 MP sensor with an aperture of f/2.2 at the front. It will boot Android 9 Pie (Go edition) out of the box with a 2600mAh battery, while it is tipped to come in red, dark grey, and blue color options. 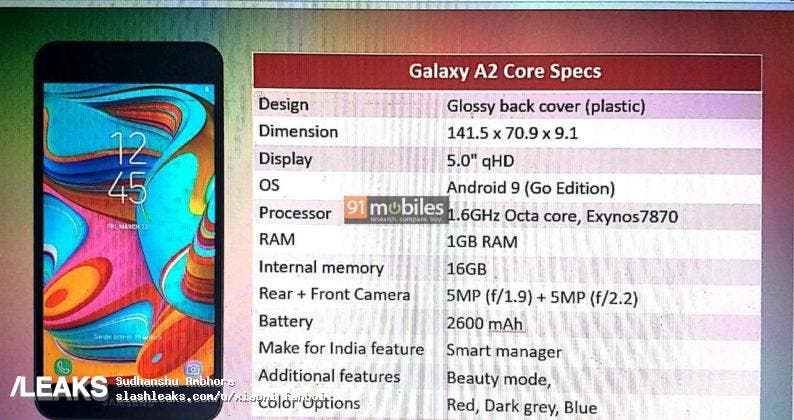 The device as per the leak is expected to sell at Rs 5,290, although we cannot confirm the authenticity of this leak, as they haven’t been officially confirmed so we advise you take them with a pinch of salt.

Next Google & Huawei may settle Nexus 6P users up to $400