Today, OnePlus CEO Liu Zuohu revealed on Weibo that they have spent nearly 100 million yuan ($14.9 million) on research and development of the screen of the upcoming OnePlus flagship (OnePlus 7). It is going to be unique in the industry. But because of this, compared to the screen of the ordinary flagship models, it is going to screen cost two to three times higher. 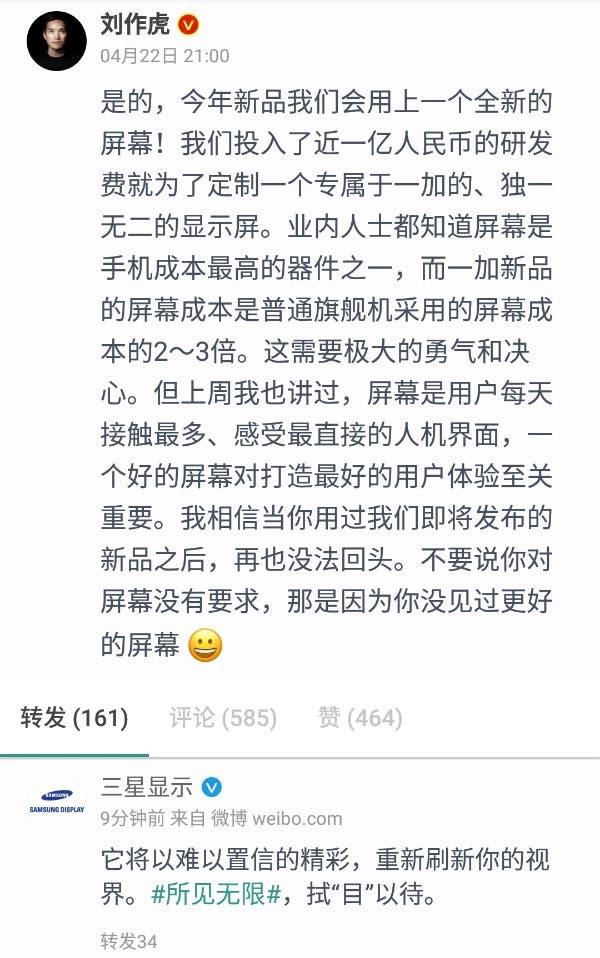 What’s more interesting, Samsung Display officially forwarded this statement on Weibo. So there is every reason to think the new display is currently being customized by Samsung.

According to the previously leaked news, the OnePlus 7 will use the Snapdragon 855 processor, the curved screen, and a three-camera on the back. It’s reported there will be a high-end version, namely the OnePlus 7 Pro. Thus, this will be for the first time when OnePlus brings more than one models at a single conference.

However, one of the biggest highlights of the forthcoming OnePlus 7 is going to be its triple-camera on the rear. It will consist of a 48MP lens, a 16MP lens, and an 8MP lens. As for the display, the phone will be using a 6.67-inch Super Optic screen, which is rumored to be curved.

At last, according to some sources, the OnePlus 7 Pro will have a 90Hz refresh rate, which is way higher than the 60Hz refresh rate of regular smartphones on the market. However, this is not the only device with such a feature, as there is the Razer Phone, the ASUS ROG Phone, the Sharp AQUOS R, and the Sharp R2 Compact. The OnePlus 7 Pro will be packed with a 4000mAh battery and will use OnePlus’s proprietary fast charging technology. The latter will allow the phone to charge for 20 minutes and use it for a full day.

Previous Redmi's Lei Wibing Confesses 'They Should Learn From Huawei'

Next Pete Lau confirms OnePlus 7 Pro, set to arrive with 5G and a significant display upgrade