Chinese manufacturers, Xiaomi and Lenovo are so quick to criticize each other when anything goes wrong. Recall that the Lenovo Z5 Pro GT with SD855 was released in December 2018 and when the Xiaomi Mi 9 arrived this year with the same chip, Xiaomi said that the Mi 9 is the first “true” Snapdragon 855 smartphone. It called the Lenovo Z5 Pro GT a “false start” because it is not available for users to purchase. Lenovo hit back at Xiaomi and questioned the availability of the Xiaomi Mi 9 after its first official sales lasted for 53 seconds. We have also seen teasers from Lenovo with phrases such as “Triple Kill Xiaomi Mi 8” and “Quadra Kill MIUI”. Now, Xiaomi has hit back via its Redmi sub-brand after the Lenovo Z6 Pro charging specs showed some discrepancies. 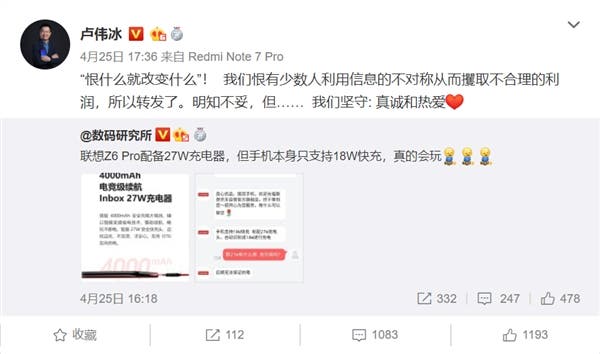 The Lenovo Z6 Pro was announced a couple of days ago. The phone comes with a 27W charger but the phone itself actually supports 18W fast charging. This implies that this smartphone can not charge faster than what an 18W fast charge can offer. Although this is not a big deal, some netizens do not see it that way especially those that have not forgotten what Lenovo did with the Lenovo Z5 (bezel-less, 4TB memory turned out to be lies).

Lu Weibing, vice president of Xiaomi Group and general manager of Redmi brand, immediately took to Weibo and said, “…We hate that a few people use the asymmetry of information to draw unreasonable profits…we stand by sincerity and love.” This obviously refers to Lenovo’s action with the Lenovo Z6 Pro charging compatibility.

The Lenovo Z6 Pro is equipped with 4000 mAh battery and according to the company, it supports 27W fast charge. However, this smartphone actually supports 18W fast charge but the charger in the box supports 27W OTG reverse charging. This smartphone features a 6.39-inch drop screen with a resolution of 2340 × 1080. It is equipped with Qualcomm Snapdragon 855 flagship platform coupled with up to 12GB of RAM and 512GB of internal storage. On the front, it comes with a 32MP camera while the rear has a 48MP+16MP+8MP+2MP AI quad camera setup. This device runs on ZUI 11 system based on Android 9 Pie depth customization.

Next A New Smartisan Phone may come later this year