OnePlus official has confirmed that it will officially release the new flagship OnePlus 7 series at the Yanqi Lake International Convention and Exhibition Center in Beijing on May 16th. The biggest selling point of the OnePlus 7 Pro is its 100 million yuan (∼$15 million) custom screen. Today, Liu Zuohu, OnePlus CEO, said on Weibo that the quality of the screen gives an exquisite feeling for ordinary users and requires an objective evaluation standard. “DisplayMate is the most rigorous and authoritative display evaluation agency in the United States, and few products receive A-level certification. Today we are very happy because OnePlus 7 Pro has the highest A+ certification for DisplayMate.”

DisplayMate's in-depth Lab Tests of the OnePlus 7 Pro OLED Display have just been completed, earning our Highest A+ Display Rating. Our in-depth Display Shoot-Out will be published here on May 14. 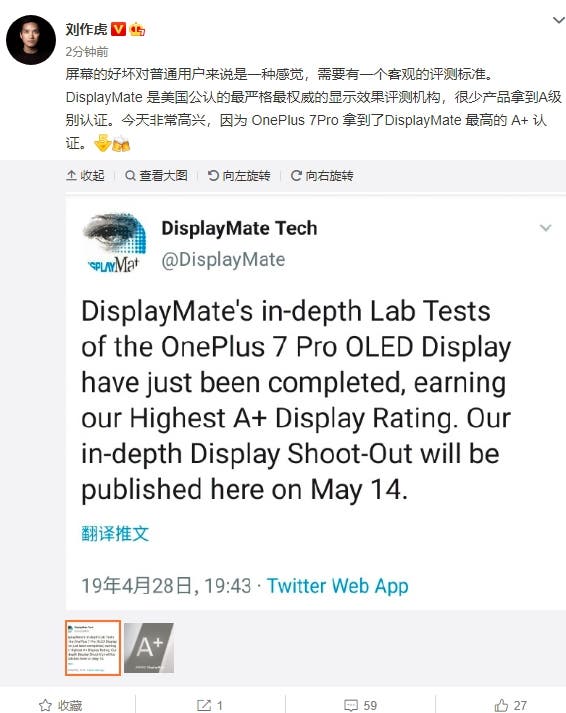 OnePlus used a customized version of Samsung’s Optic AMOLED display. According to the official statement, the screen quality has been re-commissioned and further optimized. The contrast, colour temperature, and display under strong light are much improved. Previously, Liu Zuohu said: “I believe that once you have used the new products we are about to release, you can no longer look back. Don’t say that you have no options for the screen, it is because you have not seen a better screen.”