A couple of weeks ago, Chinese manufacturing giant, Xiaomi, released a beta update for the Xiaomi Mi 9 which adds the DC dimming feature. Now, Xiaomi’s CEO, Lei Jun, announced that the second beta for this feature has been released for the Mi 9. Lei Jun said that when using the Xiaomi Mi 9 for videos, it will not use the PWM dimming mode which comes with faint stripes and flickering.

resently, the brightness of an OLED display can be adjusted in two ways: DC and PWM. The DC dimming controls the display brightness by adjusting the screen voltage or current, that is, changing the power. The PWM mode does not change the screen power. It alternately flashes at a certain frequency through the control screen, and the effect of continuous display is achieved by the visual residual effect of the human eye. If you turn on the camera with another mobile phone to record the PWM dimming screen, you can clearly see the alternate flashing of black stripes. 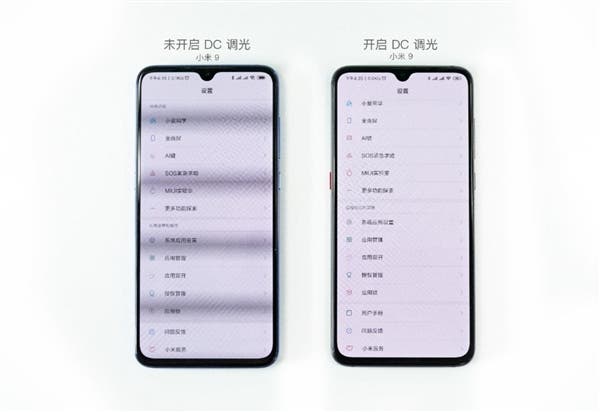 Recently, Xiaomi said that the DE dimming feature will be released for the Xiaomi Mi 8 and Mi MIX 3 in June. Lin Bin said on a Weibo post “We will support DC dimming on Xiaomi Mi 8 and Xiaomi MIX 3 in June.” Last month, the deputy general manager of Xiaomi smartphone department (touchscreen), Wu Cangzhi, said: “…for Xiaomi Mi 8 and others which also uses AMOLED screens, we will continue to evaluate its compatibility and hope to get a positive result soon”. It’s obvious that the company already has a positive result.

Next Apple's performance in China has improved, Tim Cook says why