Realme is on the roll – eyeing the EU markets with its France debut and China debut later this month. The Realme X which is supposed to be its first product launch outside of India has dominated the news headlines for the past few weeks and is finally set to launch on May 15 at a launch event in Beijing.

In one of its pre-launch teaser, Realme recently revealed the upcoming device will flaunt a notchless design and sport a pop-up selfie camera which it claimed can take up to 200,000 pop-ups in its lifetime. The brand has another teaser hyping the device just before its release. The teaser aside from re-affirming the Realme X moniker reveals a lot about the device’s camera specs. First off, it confirmed the device will come with the same camera sensor on the Redmi Note 7 Pro – a 48MP Sony IMX586 sensor having f/1.7 aperture. The image further reveals that the Realme X will come with the Nightscape Mode first introduced with the Realme 3 and then to the Realme 3 Pro. 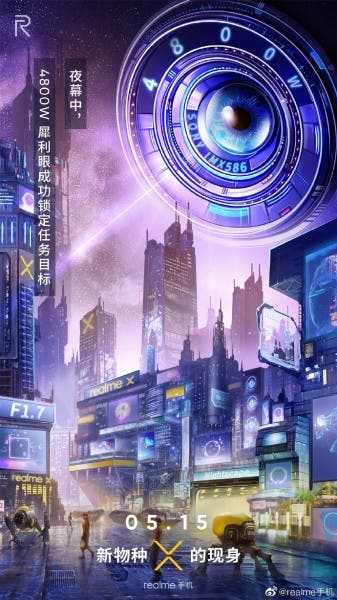 Although we yet to get a glimpse of the rear view of the device, previous leaks, as well as TENAA listing, suggests it will get come with a gradient color finish fitted with a dual camera setup. TENAA also reveals the Realme X will get a 6.5-inch FHD+ display and ship with a 3,680 mAh battery. The device will be powered by the Snapdragon 730 SoC, although there are indications it will get a more powerful and a lite variant tipped to come with the Snapdragon 855 SoC. The Lite version is said to be the Realme 3 Pro for the Chinese market, so it is more or less certain it would come with same design as the Realme3 Pro, while the Realme X Pro could get the same design as the Realme X, but with some more advanced internal makeups.