Lu Weibing Redmi’s General manager, reacting to a slew of rumors earlier last month confirmed that Redmi X is not the name of the upcoming Redmi SD855 flagship phone, while he also hinted that a better name awaits the device. The company as of now has yet to reveal an official name for the upcoming device, though fresh rumors suggest the device could be named the RedmiK20 Pro.

We are only left to speculate at the moment, however, Lu Weibing recently via a Weibo post did ask for users feedback on what name they feel is best for the upcoming device.  He also gave followers four options – including X20, P20, K20, and T20. The Xiaomi and Redmi Exec will finally reveal the official name of the flagship tomorrow, and perhaps we will also get to know the official launch date of the device at the same time. 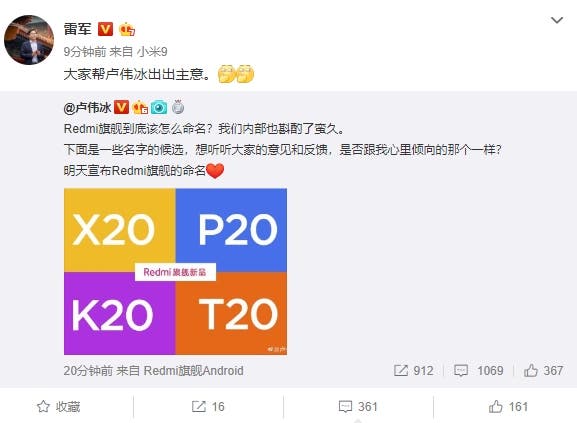 Given that the RedmiX isn’t one of the options given by the company exec, it is plausible the SD 855 powered Redmi phone could arrive as the RedmiK20 or Redmi K20 Pro.

The Redmi flagship phone with the SD 855 has been rumored for a while now and has even been backed by some official teasers. There are conflicting reports concerning the design of the device, with some suggesting the alleged Redmik20 Pro will get a full-screen design with a pop-up camera similar to the upcoming RealmeX, while others say it could come with a hole-punch design with the selfie camera in the top-middle. Whatever occupies the front, both reports favor a triple rear camera comprising of a primary 48MP sensor and a super-wide-angle lens. It definitely will boot Android Pie out of the box, while it will b powered by a 4000mAh battery.

Official teaser from the brand suggests the device in question could get a 3.5mm jack, an in-display fingerprint reader, and NFC.