Samsung’s Galaxy Xcover 4 was released way back in March 2017, while Samsung’s line of the smartphone has changed a lot since the last year, seems that the South Korean firm still thinks that Xcover series needs a sequel. The new handset is reportedly the Galaxy Xcover 5 and has just cleared FCC.

A Samsung smartphone with model number SM-G398FN/DS, likely Galaxy Xcover 5, has acquired FCC certification recently. Which hints that the device may be close to launch. The listing also reveals that the handset will ship with a 10.78 Wh battery at 3.85 Volts, which in other words means a 2,800 mAh unit. That’s not big for today’s standards, and also, it’s the same capacity present in the 2017′ Galaxy Xcover 4. 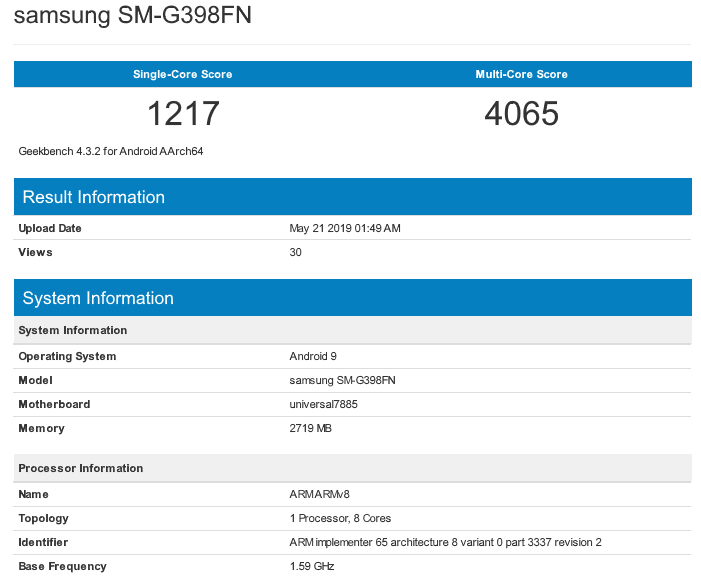 There are no details in FCC pointing to the hardware inside of the Galaxy Xcover 5, however, GeekBench is there to reveal that it will ship with an Exynos 7885. The processing power will come paired with 3GB of RAM and Storage should start in at least 32GB. The handset will come with Android 9 Pie, and it will probably come with Samsung’s One UI running atop.

Dutch retailer Centralpoint listed the SM-G398 on its website under the Xcover 4S moniker with a price tag of around €250. The listing further reveals a release date of June 4, 2019, for the new smartphone. More details will emerge about the new Xcover series smartphone if Samsung is really going to upgrade it. Considering all the trends that are hot in the industry nowadays, we are curious to see the Xcover design and if it will be able to compete in Global markets.