Meizu has revised its strategy and policy recently. It helped the company launch various great smartphones that could make a tough competition to the domestic top brands such as Xiaomi. In fact, the Meizu 15 series smartphones were great but they also lack some important features. All those shortcomings were fixed in the next-gen models. In this sense, the Meizu 16 line devices are outstanding and can be considered ‘bucket phones’. As you remember, with this phrase, Xiaomi CEO likes to describe the handset with no obvious shortcomings. Later, the manufacturer added another model to the list, namely the Meizu 16X. And this is going to have its continuation. We have been getting some rumors about the Meizu 16Xs recently. But nothing certain has been known till the date. As for today, it appeared on GeekBench. The information shown on the website of this benchmark reveals some features of our protagonist. 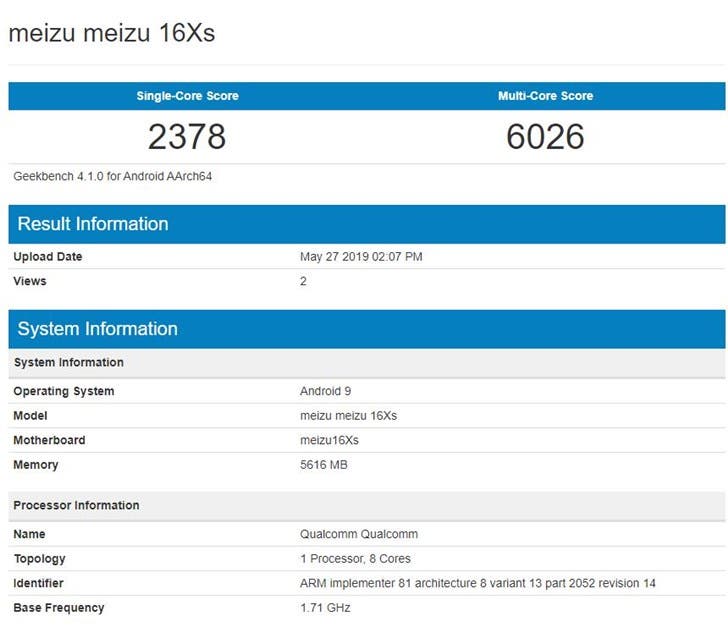 According to GeekBench data, the alleged Meizu 16Xs will be packed with a 6GB of RAM and run on Android 9. The single-core test result is 2378, while it scores 6026 points in the multi-core test.

Previously, we have heard the Meizu 16Xs will use plexiglass (a kind of plastic) as the new back cover manufacturing process. Compared with glass material, it has higher reliability and strong flexibility. It will not break even if the phone falls from a height. From the picture we can see, the Meizu 16Xs will provide at least black and coral orange color options.

However, we have heard the following specs list for the Meizu 16Xs. It should have black, gradient blue, and coral colors. The body size is 152 x 74.4 x 8.35mm, while its weight is 165 grams. It sports a 6.2inch screen with a resolution of 1080×2232. In terms of hardware, the phone should be packed with a Snapdragon 712 chip, a 3900mAh battery, and retain the 3.5mm audio jack. There also should be a triple-camera with a sensors combination of 48MP, 5MP, and 8MP. The front camera will have a resolution of 16MP. In addition, Meizu 16Xs will continue adopting the symmetrical design that Meizu adheres to.

Previous RedmiBook 14 with an Intel Core i7 processor launched