The Galaxy A10e has already secured some crucial certifications suggesting it could be released soon, and now, the device has been taken through the pace of the Geekbench test spilling the bean on a few of its key specs.

Bearing the SM-A102U  model number, the listing suggests the A10e could retain the same chipset found in the Galaxy A10 –  the Exynos 7884 chipset  coupled with 2GB of RAM. In terms of performance, the device returned a score of 1163 and 3581 points in the benchmark tool’s single and multi-core tests, respectively. As expected, the listing has it that the Galaxy A10e will boot Android 9 Pie operating system out of the box.

Details about the Galaxy A10e are scarce right now, though reports suggest it launch as a watered down variant of the standard A10, with just a few compromises. 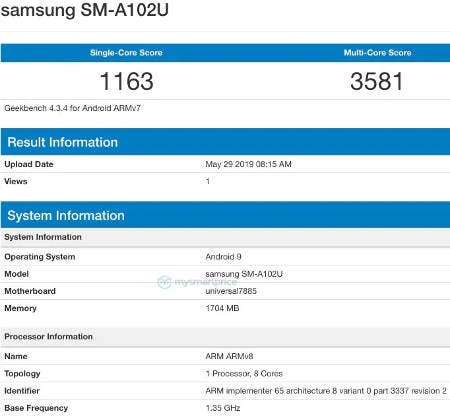 While we await more info or some sort of official announcement, reports also suggest Samsung is working on a different variant of the Galaxy A10 that could launch as the Galaxy A10s. The A10s has the model number SM-A107, and while the Galaxy A10e is tipped to be a downgraded version of the standard Galaxy A10, the A10s will be a slightly more capable variant of the A10. It is expected to land in India along side the Galaxy M40 on June 11 in Green, Black, and Blue color options.  It is tipped to come with MediaTek Helio P22 processor paired with 2GB of RAM, and will run One UI based on Android Pie.