It became apparent earlier today that VIVO might be updating its gaming phone line, iQOO, with a new member soon. The device which trended on Weibo is rumored to be the VIVO IQOO Youth edition, and as it stands, that isn’t the only device that might be debuting soon, as the brand has one more surprise under its sleeve – the VIVO iQOO Lego Master Edition.

The latest scoop from China says the Chinese smartphone maker vivo in addition to the IQOO Space knight edition launched earlier in May will be unveiling a new limited edition of its IQOO phone dubbed – VIVO iQOO Lego Master Edition in China come June 11. While we are not exactly sure what the limited edition device will bring to the table in terms of its internals, indications are that the device will be sold only on Jingdong seeing as the store’s logo is on the box, while there are also hints that iQOO will be giving away 20 free Lego Master cases to lucky winners.

As expected, the iQOO Lego Master Edition will come in a special package that includes a Lego Master customized case and the Black Knight variant of the iQOO gaming phone. The original IQOO is fitted with a 6.41-inch Super AMOLED display with a 91.7% screen-to-body ratio with Full HD+ resolution, with the Qualcomm Snapdragon 855 CPU and Adreno 640 GPU under the hood, though the rumored Youth edition is tipped to come with the Snapdragon 845 processor. The phone comes with Android 9.0 and Funtouch OS out of the box. The device gets a super liquid cooling, AI Turbo, Center Turbo, Net Turbo, Cooling Turbo, and Game Turbo for better gaming with enhanced frame rates and better app boots. 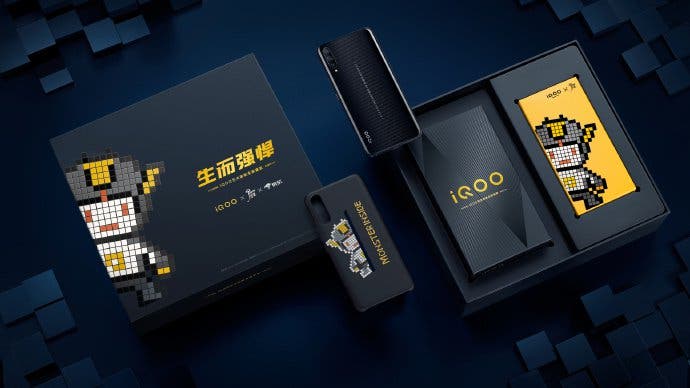 It incorporates an in-display fingerprint scanner and on the camera front, the IQOO boasts of a triple rear camera set up which comprises of a 12MP main camera, a 13MP wide-angle Sony IMX263  lens, and a 2 MP depth sensor. For the front, there’s a 12MP selfie camera with f/2.0 aperture. The whole package is powered by a 4000mAh battery with support for 44-watt ultra-fast charging