Everyone knows Qualcomm is the leading company in the mobile chip industry. Its latest flagship smartphone system-on-a-chip (SoC) was launched last year, Snapdragon 855. Also, it is the company’s first 7nm manufacturing process chipset. Now, the details about its successor (provisionally known as the Snapdragon 865) have begun to surface. According to Roland Quandt, the SND865 will be available in two versions. In fact, we have heard about this in May. So this news is the confirmation of that. 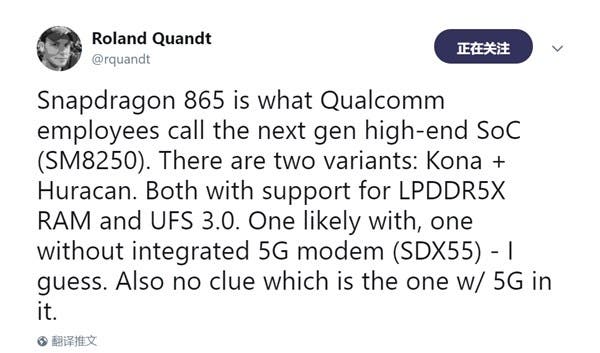 As the source said, Qualcomm employees named the company’s next-generation flagship chipset Snapdragon 865, codenamed SM8250, in line with the nickname SM8150 of Snapdragon 855. The Snapdragon 865 may be manufactured using the same 7nm manufacturing process as its predecessor.

The rumors also claim that the Snapdragon 865 will have two models. One of them will support 5G and the other will support 4G LTE network. These chipsets are codenamed Kona and Huracan. However, we still have no information which of them is for the 5G network and which for the 4G network.

The 5G modem inside the Snapdragon 865 uses Qualcomm’s Opteron X55. It is also worth mentioning that both versions of the SND865 support LPDDR5X memory and UFS 3.0 flash storage.

Like previous generations, Qualcomm is expected to release the SND865 in December. In the past two years, the first smartphone to use the company’s latest flagship chipset belonged to Samsung. But the smartphone market changes quickly. So there is every reason to think this year we will see another brand uncovering such a handset.

Particularly, Qualcomm and Xiaomi are in deep cooperation. So maybe the Xiaomi Mi 10 will be the first device sporting the Snapdragon 865. But other top Chinese smartphone brands such as VIVO and OPPO (with their sub-brands) could be the first as well.

Next Xiaomi branded Meitu phone said to be in the works, specs leaked