Rumors and teasers of the second VIVO IQOO smartphone have been doing the round for a while, but we may have finally known the launch date as the firm has now announced when the official launch event will take place. Feng Yufei, vice president of iQOO brand in a Weibo post earlier today revealed the launch date. Per the VP, the VIVO IQOO Neo will launch officially on July 2, with the theme of “core and strong”.

We have seen a few renders of the IQOO Neo, and we can say the device looks a lot like the standard VIVO IQOO, albeit a slight design on the rear panel. It should come with a waterdrop notch display on the front and triple camera setup with LED light, though the LED light position looks different.

The firm in a recent Weibo teaser revealed that the Neo will get a Super Liquid Cooling system and 4D Game Shock 2.0. While we do know that the Super Liquid Cooling will help control the phone temperature when playing games for long periods, we are not exactly sure what the 4D Game Shock 2.0, though speculations are that it might be the latest of its in-game vibration system. 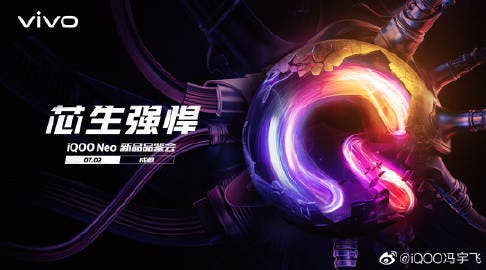 Based on the VIVO IQOO TENAA’s listing, the device will come fitted with a triple rear camera, an in-display fingerprint scanner, a footprint of 59.53 x 75.23 x 8.13mm, a 6.38-inch display of unknown resolutions, and a 4500mAh battery listed as 4420mAh. Under the hood, the Neo should come powered with the SD 845 SoC, though other details are scarce at the moment.