iQOO, a gaming-focused sub-brand of Chinese manufacturer, Vivo, is getting set to announce its second smartphone, iQOO Neo. Yesterday, the first teaser of this smartphone appeared online. After this, it surfaced on TENAA’s database with images and a few specs. Now, there is another teaser which reveals more spec and features of this upcoming smartphone. 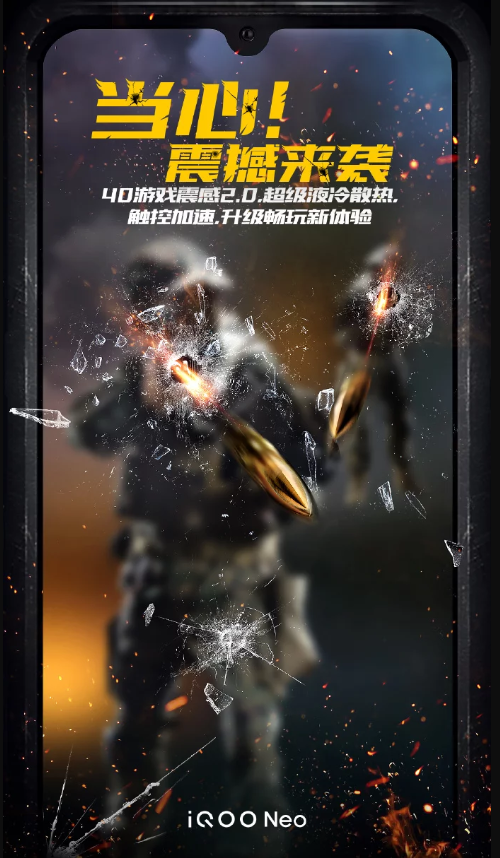 The new teaser shows that the iQOO Neo will sport the 4D Game Shock 2.0. Although the exact function(s) of this new feature is not clear, it may be related to its in-game vibration system. In addition, this smartphone will also come with a Super Liquid Cooling. This aims to keep the phone in good temperature at all times.

From what we already know, the iQOO will have the Snapdragon 845 SoC under the hood perhaps with  6GB/128GB of RAM, despite been positioned as a more affordable version of the monster IQOO phone. Other reports suggest that this device will come with a 6.38-inch waterdrop notch display with an on-screen scanner. It could also come with a triple rear camera and the battery capacity will reach 4420 mAh with support for 22.5W fast charge.

Speaking of the TENAA listing, iQOO Neo will come with a dimension of 159.5 x 75.2 x 8.1 mm. It packs three camera sensor on the flipside, though there isn’t any fingerprint scanner.  This suggests an under-display scanner. The listing further revealed that the Neo will come with a 4420mAh battery – up from the 4000 mAh battery on the original iQOO.