Indications emerged yesterday that hinted that it will announce the in-display camera tech at the MWC is China, and now, the company has again revealed that the OPPO Smartphone with the In-display scanner will launch on the 26 June in China. Although we might not see a market-ready one, but rather a prototype or a production device equipped with the breakthrough technology. 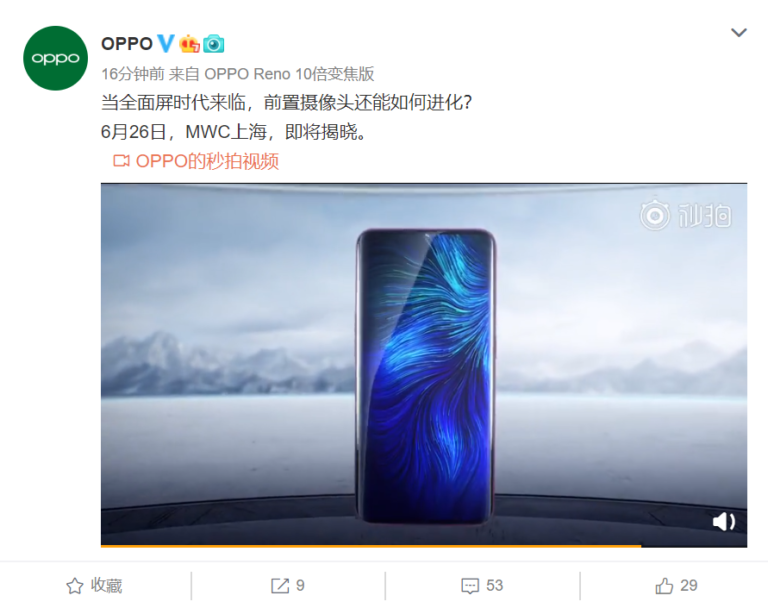 The phone maker who has been at the forefront of many innovative techs shared a video teaser on Weibo earlier today showcasing its front camera tech over the years – ranging from the OPPO N rotational camera, the so-called waterdrop notch on several of its devices, the pop-up camera setup on the Oppo Find X and now the shark-fin setup on the Oppo Reno.

What next after the shark-fin pop-up on the Reno, well, OPPO is rooting for the und-display camera solution, and in the final part of its video, the firm revealed a truly bezel-free device devoid of any mechanical part, or even the notch. The firm first demoed the tech in a short video teaser weeks ago, but it will be unveiled to a wider audience on June 26 at the MWC in Shanghai.

#Oppo #OPPOReno #Xiaomi
On June 26th, MWC Shanghai will soon reveal the ultimate form of full screen! Looking forward to the arrival of the OPPO screen camera! Waiting for a surprise from Xiaomi) pic.twitter.com/3uK5Z389Y7

Do note that you might not be able to buy any OPPO phone with the under-display camera just yet, as the firm admitted the technology will take much more time to reach commercial availability. As per OPPO VP Shen Yiren, the complexity of the under-screen camera will make it very hard to mass produce by the end of this year.

Next OnePlus TV launch is near, suggests tipster