We already know that Xiaomi is preparing a launch event for July, where two versions of the Mi CC9 will be revealed. The company already sent the invites for the event. Now, A Weibo post by the official Xiaomi account confirmed that the third variant of CC9. It will carry the Mi CC9 Meitu Custom Edition moniker. 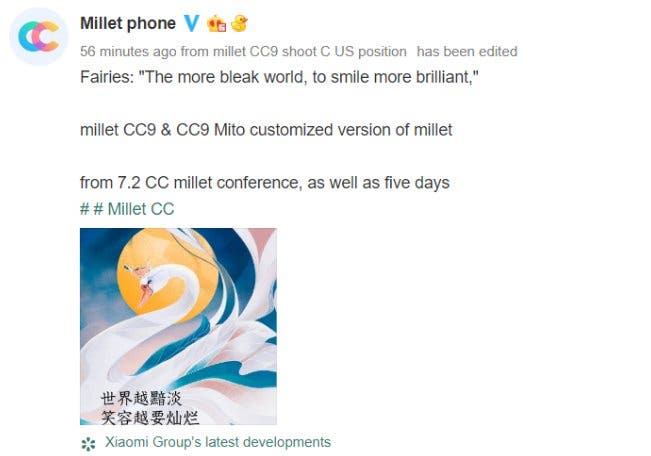 Weibo’s post specifically states the launch date of both Mi CC9 and Mi CC9 Meitu Custom Edition for July 2. This isn’t the first time that news emerges about a Meitu custom edition of the upcoming CC9. A few days ago Sudhanshu Ambhore posted on Twiter that three new phones Xiaomi will launch next week. There is the CC9e which is a lite version; the CC9, and then a custom edition.

While details about the Mi CC9 have been exposed, we still don’t know how the Meitu Custom Edition will look like. But hold your breath, Meitu lover, we don’t think it will resemble the old company’s exotic design. The Mi CC9 features a triple camera setup with AMOLED display and UD fingerprint scanner. For more details, you can check this post.

Meitu, not Meizu, was a company that focused on neat camera-centric phones with an unusual design. The company was acquired by Xiaomi last year, which promised to keep releasing Meitu-inspired devices. We consider this new Meitu Custom Edition as the way that Xiaomi opted for fulfilling its promise.

Next Chinese MND refutes Huawei's affiliation with the military