After getting FCC’s approval, the Samsung Galaxy A10s has just paid a visit to Wi-Fi Alliance. The certification process was successful and now the device is ready for a release.

Getting the certification is usually a clear indication that the phone is about to get released pretty soon. The handset bears SM-A107F model number, this goes with past rumors about the A10s. FCC has certified the device with the SM-A107F/DS. Notably, it will come in dual SIM options as suggested by the code ‘DS’ in the model number. 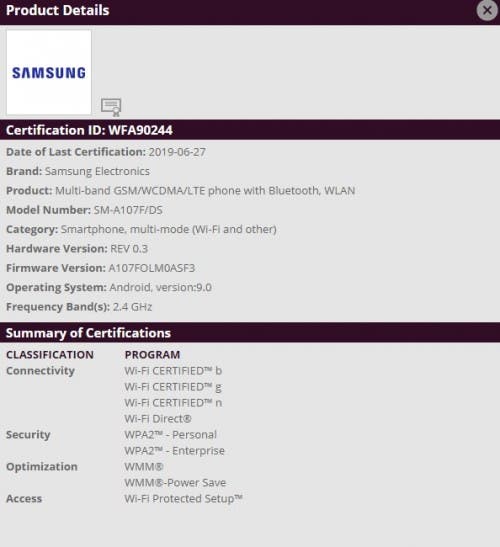 Unlike the standard Galaxy A10, the A10s will feature a rear-mounted fingerprint scanner as well as a dual-camera setup. The device measures 157mm tall and 75.8mm wide. It boasts a 3900mAh battery that optimized by Android Pie. Despite the improvements, there’s just a single Wi-Fi band (2.4GHz),  but Bluetooth and 4G LTE are included. The handset will feature one of Samsung’s Exynos chipsets.

The Galaxy A10s will soon reach India along with some other “S” devices. These devices will serve as an upgrade for the best-selling A-series. Worth noting that the Galaxy A10 is the cheapest and less packed device of the A-range. The device was earlier rumored to debut alongside the M40 in India, but that didn’t happen.