Samsung’s Galaxy A50 is a great mid-tier handset right now, and that is even more so after the last price slash. But what will add more allure to that is the new update that brings new features to the handset. The update OTA that comes with the June security patch whose firmware version is A505FDDU2ASF2. The update was reported by a user on Twitter (via SamMobile) who noticed the new features along with the changelog. 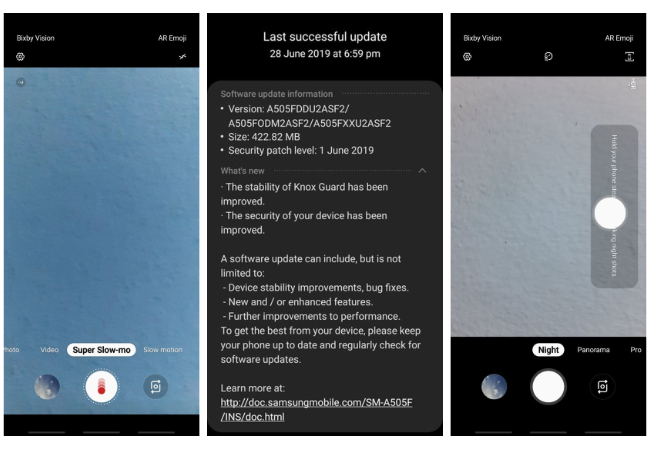 The new features include a night mode for better low-light photography as well as Super Slow-mo video recording. Moreover, QR code scanning is also now available without Bixby Vision, a feature that was recently pushed to the Galaxy Note 9 and Galaxy S10 as well. If the above-mentioned features are somehow not visible even after the update then users should try resetting the camera. This can be done by first opening the camera app, going into settings, and hitting Reset settings at the bottom of the list.

The Galaxy A50 which was launched in February starts at Rs 18,490 for the 4GB + 64GB base variant and boasts a 6.4-inch (2340 x 1080 pixels) Full HD+ Infinity-U Super AMOLED display inside a shimmery chassis. Its processor is the Exynos 9610 10nm processor with a Mali-G72 GPU. There’s a triple camera setup on the phone’s back with a 25MP f/1.7 primary sensor. It already runs Android Pie sipping power from a 4,000mAh battery.

Next Just in! Trump lifts Huawei ban, to resume trade talks with China

Samsung Galaxy M30s and Galaxy A50 Receiving Android 10 Update with One UI 2.0 in India