After months of waiting, Samsung now has finally started rolling out the latest Android 10 update to other Galaxy devices in India. The recent members for the One UI 2.0 update are the Galaxy M30s and Galaxy A50. Many Indian users of both the devices started receiving the new update earlier today. In fact, the update has also hit the South Korean market. 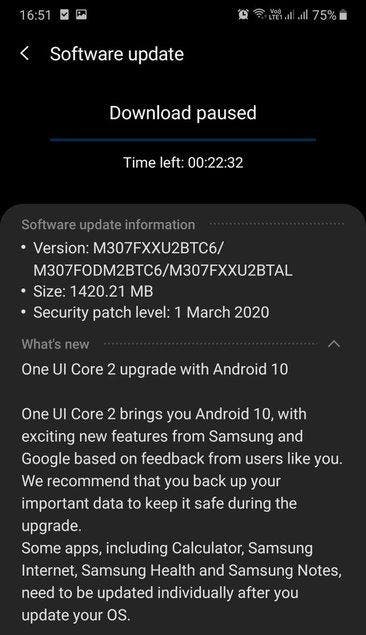 First up we have the budget Galaxy M30s smartphone. The new Android 10 update for this device carries the software version M307FXXU2BTC6. The phone gets the latest Android update with the core One UI 2.0 on top. The update also brings the latest March 2020 Android security patch for the device. Coming to the size, it weighs around 1.4GB in size.

Apart from Galaxy M30s, the mid-range Galaxy A50 has also started receiving the latest Android 10 update in India. The new update carries the firmware version A505FDDU4BTC4. Unlike the M30s, this one is receiving the older February 2020 Android security patch. The One UI 2.0 update for the A50 weighs around 1.78GB in size.

If you’re a user of any of the two devices, then you might have already received the update notification. If not, you can always go ahead and do that manually by heading over to Settings>>Software Upsate>>Download and Install. The company might be rolling out the update in batches so you might not get the notification in an instant.

The all-new One UI 2.0 with Android 10 brings numerous features to the device. Here is the list of few of them.

Previous These are the countries to receive Oppo Find X2 series