Popular benchmarking website, AnTuTu earlier today released its list of top performing smartphones for the month of June. Virtually all the spots were clinched by smartphones from out of China, with just two from Korea. Much like the month of June, ZTE Nubia Red Magic 3 gaming smartphone took the first spot, making it in two successions. The device boasts of the powerful SD 855 SoC coupled with 12GB RAM, ICE2.0 stereo multi-dimensional cooling system, as well as a built-in high-speed physical fan

Xiaomi Black Shark Game Phone 2 and Xiaomi Mi9 Transparent Edition took the second and third spots with average scores are of 375592 and 371021 in that order. Xiaomi continues the lead with its Xiaomi Mi9 on the fourth spot with an average of 370,884, while the OnePlus 7 Pro takes a place on the fifth position. 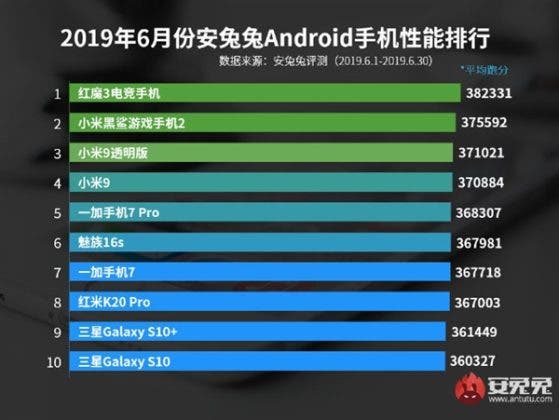 The Meizu 16s closely follows the OnePlus 7 Pro, then the standard Oneplus 7 on the 7th position, while a new entrant from Xiaomi backed Redmi takes the 8th spot. The Redmi K20 Pro is the brand’s first flagship device powered by the SD 855. Unlike other flagship SD 855 powered phones, the Redmi K20 Pro is decently priced, no wonder it has already crossed the 1 million sales record in just one month of its release.

The Galaxy S10 and S10+ from Samsung take the last two seats for the second month running averaging at 361,449 points and 360327 points respectively.