Samsung’s Galaxy A series has been an unending story this year. A new Samsung smartphone with model number SM-A507FN has been spotted on the Geekbench benchmarking platform It seems the company is determined to launch as many phones in the A series as it can this year probably just to flood the market and overwhelm buyers. It’s reached a point where consumers might overlook any other options in a retail store because of the sheer number of products that Samsung has on its shelves. Speaking of which, the new handset is thought to be a  Galaxy A50s although there’s no indication of that in the listing. 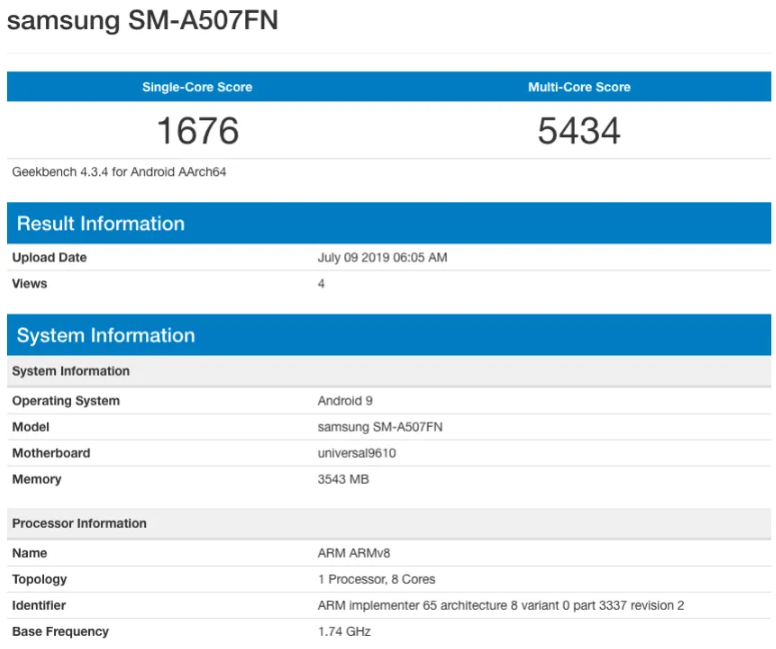 As per the benchmark, the handset rocks an Exynos 9610 SoC which also exists on the Galaxy A50 as well. It runs Android 9.0 Pie and this particular model has 4GB of RAM. The  Geekbench listing shows the alleged Galaxy A50s managed to score 1676 in the single-core test and 5434 points in multi-core. In a related story, Samsung is also rumoured to be working on the holy grail of bezel-less smartphones  – the supposed Galaxy A100.

Also, this is not the only Galaxy A series phone that has been rumoured to be in the pipeline lately. There’s the long rumoured A30s, A20s, and the A70s all of which are yet to be official.

Previous Vivo expands to the UAE with two smartphone launches