The commercialization of 5G technology is on its way and a couple of countries already have this network. Wireless coverage mapping company, OpenSignal, reports that the US is leading the 5G network speed. According to OpenSignal tests, the US has the highest level of construction and quality experience. In comparison with eight major countries and regions that have begun commercial 5G networks, the US is more sophisticated. Its 5G real-world downlink maximum rate is 1815Mbps, which is 2.7 times that of the 4G peak. However, its result does not include China which is a real competition. 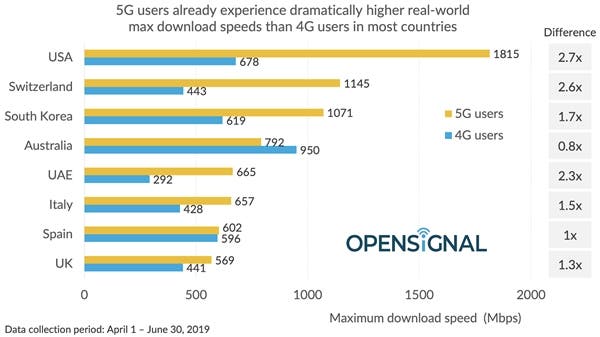 Ranked second is Switzerland, with a 5G downlink peak of 1145Mbps, which is 2.6 times that of 4G. South Korea is third while the 4th to 8th positions are taken by Australia, United Arab Emirates, Italy, Spain, and the United Kingdom. Among them, Australia is the most embarrassing.

As for why the US 5G is so fast, the reason is that its priority is based on the high-frequency millimeter wave band, while other countries and regions are mainly in the 3.4-3.8 GHz mid-range. According to the frequency band of the Ministry of Industry and Information Technology, the three major operators in China operate in the medium-term. The 5G signal also relies mainly on the Sub 6GHz mid-band.

Previous Samsung mobile is set to pack out of China