While we await VIVO’s first 5G smartphone to hit the market in China, the company is now set to refresh its Z-series and mid-range smartphone portfolio in the country. The company has reportedly sent out media invites for a launch event scheduled for July 31 in China. The event will serve as a launchpad for the VIVO Z5.

The device will perhaps be a slightly enhanced version of the VIVO Z5x launched earlier this year. And while we do not have solid information regarding the VIVO Z5 Specs, reports have it that it could be the same device as the VIVO phone with the V1921 model number that surfaced on TENAA a while ago. 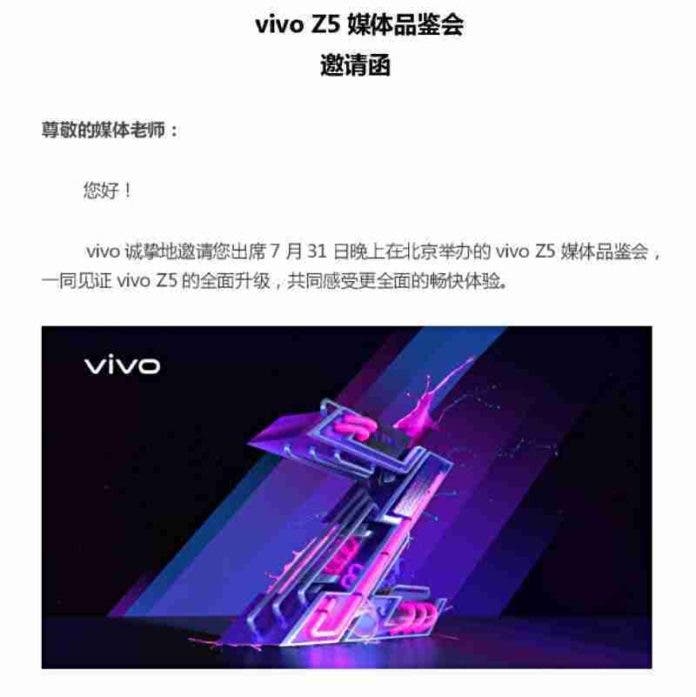 Interestingly, the alleged TENAA listing of the VIVO Z5 suggests it could be dropping the punch hole on the Z5x for a water-drop notch. And while that seems more of a downgrade, the device again gets the more cherished in-screen fingerprint reader in place of the capacitive scanner on the rear of the Z5X.

Furthermore, the TENAA listing reveals the VIVO Z5 has a triple rear camera setup. It comprises of a 48-megapixel primary lens, an 8-megapixel secondary sensor, and a 2-megapixel tertiary lens. The camera above the display is a  32-megapixel shooter. Under the hood, it has an unnamed  2.3GHz octa-core processor. It comes with up to 8 GB of RAM, and 256GB of non-expandable storage. It has a footprint of 159.53 x 75.23 x 8.13mm, weighs 189.6 grams, with a 4500mAh battery – listed as 4,420mAh.

Vivo hasn’t any official teasers of the Z5  yet. But we hope to see some teaser via its Weibo and other social channels in China pretty soon.