On August 9-11, Huawei will hold the 2019 Developer Conference in Songshan Lake, Dongguan. Huawei recently released a new poster: “The legendary super terminal is coming! When the mobile phone is no longer just a mobile phone, the computer is no longer just a computer, what is the N-th power of the smart terminal?”…It also adds “Together we will see how smart terminals fit together and portray the future of the IoT”. This poster obviously refers to the Honor Smart Screen which was first announced on July 15. At the time, Honor’s president, Zhao Ming, said that the smart screen will be officially released in early August, which coincides with the Huawei Developer Conference time. In view of the official micro-preheating, the Honor smart screen will be officially unveiled during the Huawei Developer Conference.

Honor Smart Screen is not a TV

According to Zhao Ming, while the digital TV era (high-definition pixels) and the Internet TV era (network + system) are fading away, we are slowly entering the era of smart screens (smart Internet) in 2019. The Honor Smart Screen is not TV, but the future of TV. Television used to be the center of the whole family and the gateway to discovering the world and getting information. The new smart screen will become the new center of the home. Apart from this, the Honor Smart Screen will become the center of audio and video entertainment. Undoubtedly, the most basic functions of smart big screens would improve in the future. They include image processing, fast switching, and powerful audio and video capabilities. 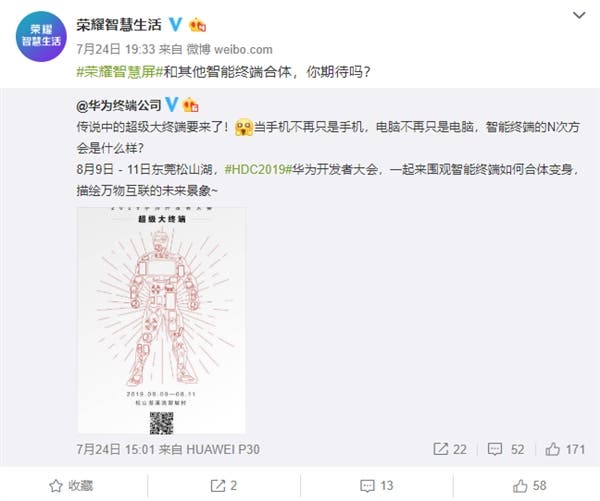 Honor has created this product with a goal in mind of making it the center of everything. The company claims it will become an information-sharing center. Apart from this, the Honor’s Smart Screen will turn into a control management center and multi-device interaction center. In the future, many features in this device would improve. Among them, we can mention the computing power, interactive capabilities, communication, information processing, and perceived capabilities. And Honor is open for any kind of cooperation to make this new technology even better.