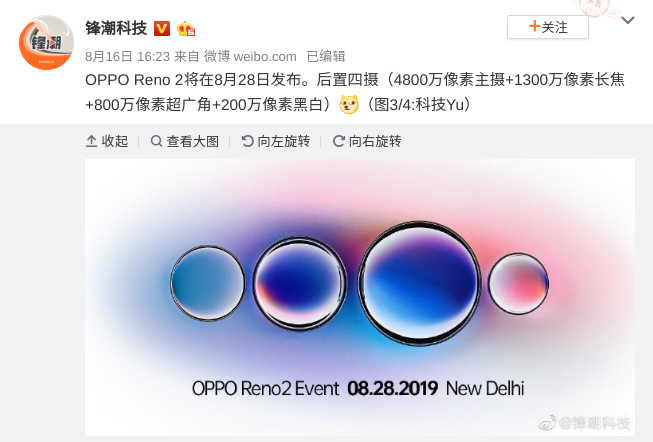 New information regarding the quad rear camera resolution of the new Oppo Reno 2 have surfaced today. The leak suggests that the Reno 2 will have a 48 MP primary camera and a 13 MP telephoto lens. The media invite revealed that the new smartphone will come with a huge 20X zoom. The camera will also have an 8 MP super wide-angle lens and a 2 MP monochrome sensor. There is no information regarding the pixel size or the aperture of the final image in the leaks. The phone will feature a Shark Fin pop-up front camera.

Official glimpses of the Oppo Reno 2 have been seen in video teasers today. The phone seems to have a dark navy blue surface finish and the same aesthetic as its predecessors. The new Reno phone has also received its 3C certification under the model number OPPO PCKM70 in China.

As per the 3C certification via DroidShout, the phone will be coming with VOOC 3.0 support for 20W fast charging and it will also support 5G connectivity. The handset will also have a full-screen display with low bezels and a thin chin. The quad-camera setup with sensor will be aligned vertically in the top-centre position.

Next Realme 5 Pro goes through Geekbench ahead of launch

Oppo Reno 2 in launching in the UK on October 16

OPPO Reno 2 released with SD730G and a 48MP camera