The Oppo Reno 2 first launched in India back in August is currently only available in the launch Country -India and China. That, however, changes soon, as the device will be landing in Malaysia and the United Kingdom soon. The imminent launch of the Reno2 in the UK isn’t surprising given that the standard Reno mid-range Reno also made its way to the UK market.

Officially, the OPPO Reno 2 launches in the UK on October 16th at an event at English National Ballet in London at about 4.pm Uk time, and about 22 o’clock Beijing time. The company took to Twitter to announce the imminent launch of the Reno2 in the UK, but by that, we do hope the Reno 2F, and the Reno 2Z,  will be launch in the UK too.

The OPPO Reno 2 boasts of some hi-tech features but does not feature 5G support. Its major highlight is its photographic prowess.

Design-wise, the Reno2 gets the same design as its predecessor featuring a shark-fin pop-up camera for a notch- and bezel-free 6.5-inch AMOLED display (2,400 x 1,080 resolution). 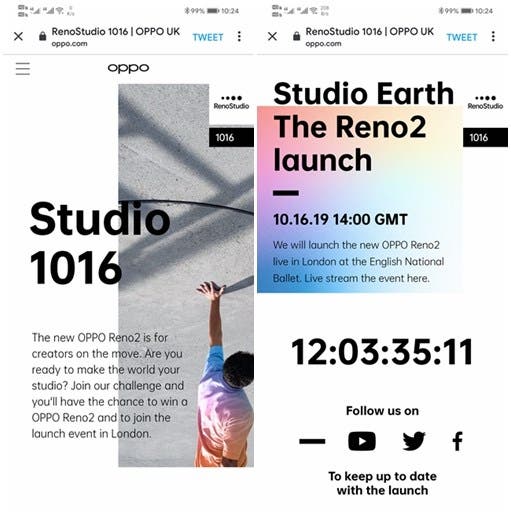 The Reno 2 packs a total of five cameras – a Quad rear Camera, and a single front-facing camera. Speaking of the rear cameras, the Reno2 gets a 48MP Sony IMX586 1/2.0” sensor with f/1.7 aperture,  OIS, and Ultra Steady Video. There is a secondary 8MP ultra-wide-angle camera with a 116° lens, coupled with a 13MP telephoto (1/3.4”, f/2.4) with 5x hybrid zoom. A 2MP monochromatic camera for portraits completes the camera setup.

Reno 2 price in the UK