Huawei is all set to add another smartphone to its growing Nova lineup and this time we’re looking at the Nova 5T. Huawei Nova 5T, as the name suggests, is going to be an upgrade over the previous Nova 5 smartphone. Last week, the very same smartphone made its very first appearance online all thanks to the Google Enterprise directory. Although there is not much information available on the smartphone except the fact that it is going to be a rebranded version of Honor 20. 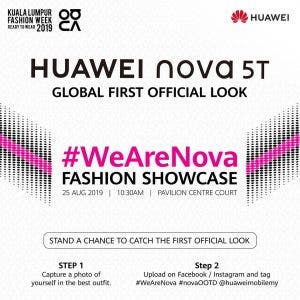 The smartphone maker has now confirmed the existence of Nova 5T smartphone with the help of a promotional poster. As per the poster, Huawei Nova 5T will see its official launch coming Sunday i.e. August 25 in Malaysia. The Chinese smartphone maker will announce the smartphone during its #WeAreNova Fashion Showcase event. Sadly, the official promo poster doesn’t reveal any key information of the device leaving things to our own imagination.

There is a solid chance that the brand might also announce the Pro variant of the Nova 5T lineup which should be nothing but the Honor 20 Pro itself. Considering the fact that Huawei Nova 5T is a rebranded version of Honor 20, we can assume the specifications and features the smartphone will come packed with.

On contrary to the previous leak, the upcoming Nova 5T will feature a large 6.26-inch IPS LCD display having a resolution of 1080×2340 pixels and an aspect ratio of 19.5:9. Previously, the smartphone was expected to come with a much more compact 5.5-inch display. Under the hood, the device is going to powered by a Kirin 980 chipset paired with 6GB of RAM and 128GB of internal storage. At the back, there is a quad-camera setup consisting of 48MP primary lens, 2MP depth sensor, 16MP ultrawide lens and 2MP micro. For selfies, the device is equipped with a 32MP front snapper with an aperture of f/2.0. Huawei Nova 5T is expected to run on the latest EMUI 9.1 based on Android Pie. All of this is backed by a 3,750mAh battery packed inside.

Next Triple camera Mi A3 debuts in India