Google Home Mini is one of the most popular smart speakers that managed to make its way through many households over the last couple of years. The second generation of Home Mini has been long overdue considering the fact that first-gen was launched way back in 2017. It seems like Google is now working on the next iteration of Home Mini. As expected, this time the search engine giant is calling it Nest Mini. For those who’re unaware, Google earlier this year moved its smart home products to Google Nest. Since it’s been two years, Google is planning throw in significant upgrades on the next-gen Nest Mini. 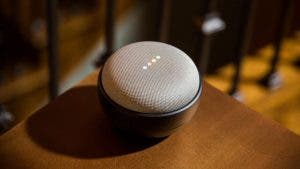 Like its predecessor, the upcoming Google Nest Mini is going to offer smart speaker experience at an entry-level price tag. In terms of physical form factor, the Nest Mini will resemble the first-gen Google Home Mini. You can expect roughly the same size or perhaps slightly larger with the next iteration. With that said, the speaker will still come with similar functionalities. Coming to the significant upgrades, this new report indicates that the upcoming budget smart speaker from Google will come with a wall mount. There is no information on how will the mount look. We might see just a groove on the back allowing users to hang it on the wall like a picture frame. Well, the wall mount would be a great addition considering the immense popularity of third-party mount for Home Mini.

Apart from this, the Nest Mini will feature a 3.5-mm audio jack following the footsteps of Echo Dot. Google might use this audio jack as audio input or as a replacement of Chromecast Audio. Moreover, the next-generation of smart home products will offer much better audio quality with higher bass and volume levels. Interestingly, the Nest Mini will see the addition of a proximity sensor. There is no information on how the speaker will use it. High-end Google Home products already feature various kind of sensors to maximise the accessibility of various features. We might see some similar development in the next-gen Nest Mini smart speaker.

Looking at the previous trend, Google Nest Mini can go official later this fall alongside the Pixel 4 lineup on the company’s annual Made By Google conference. As per the report, Google is also planning to refresh colour options with the second-generation of the smart speaker. Unfortunately, there is no solid information on the colour scheme for this year. Coming to the price tag, we might see the speaker launching with the same $49 price tag as the last model.

Previous Android 10 is the next Android version; gone are the dessert-based names