Samsung is gearing to release a couple of S-upgrades for both its A and M lineup. While some handsets have already made its way to the shelves, like the A10s, other devices will arrive through the second half of this year. Apparently, one of the next handsets in the line is the Galaxy A70s, which has just received certification from Wi-Fi Alliance. 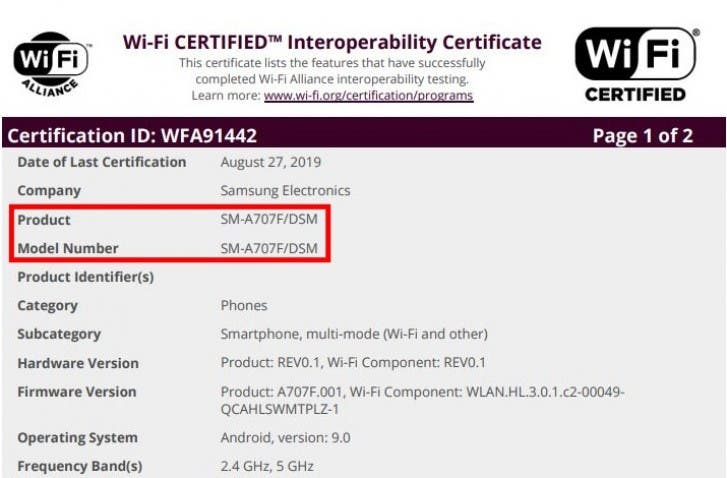 The listing reveals a handset with SM-A707F model number just like its previous appearance on a Geekbench listing at the beginning of the month. The listing reveals dual Wi-Fi band capabilities and support for  802.11 ac standard.  The new leak comes to confirm the arrival of Android 9 Pie with OneUI running atop. Under the hood, the Galaxy A70s will boast the Snapdragon 675 paired with 6GB of RAM just like its predecessor.

The Icing on the cake of the Galaxy A70s will probably its camera department. According to reports, the new handset will boast no other sensor than Samsung’s upcoming  64MP Samsung ISOCELL GW1 sensor. Thankfully, we won’t have to wait much longer for the release of this new premium midrange device. After all, the Wi-Fi certification means that the handset is giving its last steps before becoming official.