Redmi and Realme have made no secret plans to launch a smartphone studded with a 64MP camera sensor from Samsung. That could be happening soon,  but is Samsung launching a smartphone with the same sensor soon? and while would other firms be the first to embrace the sensor? Well, a recent report from Korea suggests the Korean firm could employ the sensor in one of its upcoming A series phone and an enhanced version of the Galaxy A70 – the Samsung Galaxy A70S.

While the A70 first launched and remained exclusive to India, ET News suggests the Samsung Galaxy A70S could launch soon, though not sure where and when it will launch. Now, the alleged Galaxy A70s with the model number of SM-A707F  has surfaced on the Geekbench database suggesting it could be launching soon. The Geekbench doesn’t list the device by its actual name. But given that the standard A70 has the SM-A705 model number, it is almost certain that the SM-A707F could be the Galaxy A70s.

The listing reveals that the device will share the same chipset with the Galaxy A70 – the Snapdragon 675 chipset.  It is coupled with 6GB of RAM and Android 9 Pie. This substantiates reports that suggest the device might not get major upgrades as that might be restricted to the camera unit.

And speaking of the camera department, it is relatively certain the Galaxy A70s might retain the triple-lens setup on the A70. But this time with a new 64MP primary sensor, and of course, two other sensors that we currently do not have their details. 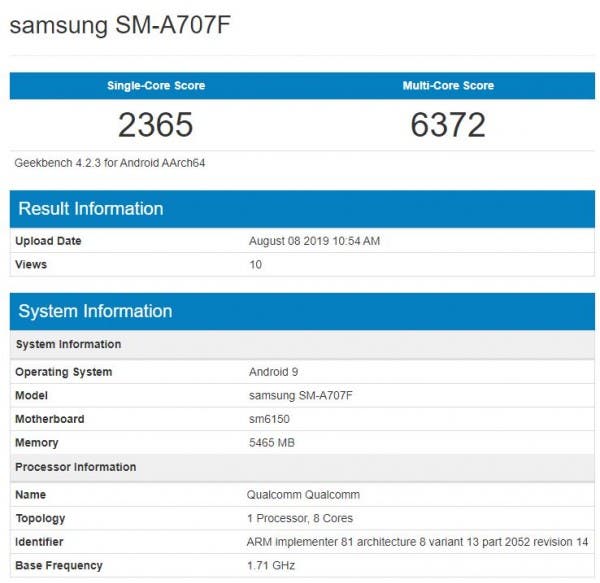 According to reliable leakster Ice Universe, Samsung is working on a Galaxy A series phone with a 64-megapixel camera. The device is tipped for release in September or October.

Next Huawei Harmony OS released for ALL devices