It’s been almost a year since the launch of iPhone XR, XS and XS Max. Well, September is just around the corner and it’s time for the company’s next-gen iPhone lineup. Apple has now announced the official iPhone announcement event which is scheduled on September 10. As expected, the event will take place at the Steve Jobs Theatre in Cupertino, California. The official launch event will kickstart from 10 am local time. Here is what we can expect from the massive event based on the previous leaks and rumors. 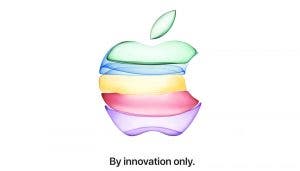 Later today, Apple sent out the official invites to the publications consisting of the artwork shown above. As you can see, the artwork says “By Innovation Only” with a unique iteration of Apple logo. It would be surprising to see what innovative feature Apple has in store for us. Sadly, the launch invite didn’t reveal any key feature of the next-gen Apple iPhone lineup.

There have been plenty of leaks, rumors, and speculations on the upcoming iPhone lineup since the last couple of weeks. Like the previous year, Apple is expected to launch three new versions of iPhone that will eventually replace iPhone XR, XS, and XS Max. Although the Cupertino-based company might use the iPhone Pro moniker for the top two variants. In terms of camera, the iPhone Pro might flaunt a triple rear camera module and a single selfie shooter with 120-fps slow-motion feature. We might also see the reversible wireless charging on the Pro variant allowing users to charge Airpods through the phone itself. On the other hand, the iPhone XR’s successor might settle for the dual-camera lens.

Speaking of the display, the new iPhone-trio might settle for the same screen resolution as of its predecessors. Moreover, we expect the new lineup to make use of the lightning port and not the expected Type-C port. Under the hood, we will see the A13 bionic chipset on all three devices with Haptic Tough that will replace the 3D Touch feature. Various rumors have also suggested the presence of wide-angle Face ID sensor. Sadly, Apple is not planning to integrate 5G connectivity to its new lineup and might keep it in the pocket for 2020.