Realme has released several teaser posters as well as a teaser video for its upcoming smartphone, the Realme Q, ahead of its launch in a few days time. While there have been speculations that the RealmeQ is the Chinese version of the Realme 5, the latest batch of teaser posters suggests it could be more than that.

The Realme Q will be more reliable and durable, featuring a more rugged exterior. That’s one of the messages the company is conveying in a fresh batch of teaser posters first reported by Sparrownesw. According to one of the posted attached below, the Realme Q promises to survive the 100°C water boiling tests, which obviously means it could also come with the standard water and dust resistance “beyond the price segment”. Of course, such claims are not new, but could easily be taken for a marketing gimmick considering the device’s price segment. 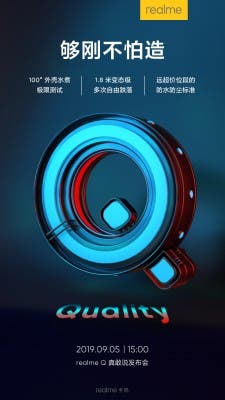 A different poster also has a very salient message. It says the ReameQ has been rated to survive drops from 1.8m which essentially confirms it has passed the military transport test under MIL-STD 810G.

Other than the aforementioned, RTealme further confirms that the RealmeQ will retain the chipset inside the Realme 5 – the Snapdragon 712 chipset, with a main 48MP camera,  as well as a 20W VOOC fast charging. The device is tipped to come with a 4,035mAh battery.

Realme has officially confirmed it will be announcing the Realme Q in China September 5th. Speculations are rife that the Realme XT – the company’s first smartphone to feature a 64-megapixel camera will also launch alongside the RealmeQ.