Android 10 is finally here, and is already rolling out to the Pixel, Essential and even the Redmi K20 Pro. Although rollout to other devices will be typically gradual, we expect a number of devices to begin to boot the new OS out of the box. One of such is the upcoming Oneplus 7T and Oneplus 7T Pro which launches later this month.

The device recently surfaced in a CAD render courtesy of Pricebaba, with some rumors also pointing to a special  McLaren Edition for the Oneplus 7TPro.

Now, an unnamed device alleged to be the Oneplus 7T has been spotted on Geekbench listing, revealing some key specifications and features. The smartphone which has the HD1990 model number attained a single-core score of 3,983, and a multi-core score is 10,943, both of which outperforms the Oneplus 7 flagship. 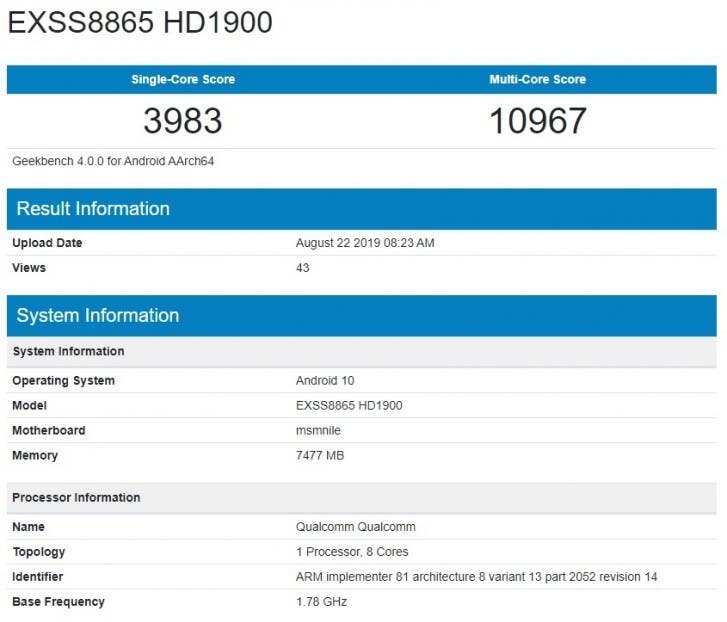 The device is reported to be the Oneplus 7T variant with Hydrogen OS (that’s without Google services). And at the heart is the Snapdragon 855+. Interestingly, the said device took the Geekbench test running the latest Android 10, and that essentially confirms that the Oneplus 7T and Oneplus 7Tpro will be one of the first few to boot the OS out of the box. The Oneplus 6T from last year also had the Android 9 out of the box.

Furthermore, the Geekbench listing reveals the device features 8GB of RAM, while previous leaks point to a 90 Hz display with 2K resolution and an OLED panel with a built-in fingerprint scanner underneath.

The Chinese firm hasn’t revealed much information about the Oneplus7T and 7T Pro. However,  we expect to get more details in the coming days and will keep you posted.