Recently, a new smartphone from Realme with model number “RMX1915” got EEC certification. According to speculations, this smartphone could be the Realme 5i. However, there is no confirmation of this rumor. The Realme XT and Realme 5 Pro models are “RMX1921”, “RMX1971”. Thus, the Realme RMX1915 could also be in the Realme 5 series. 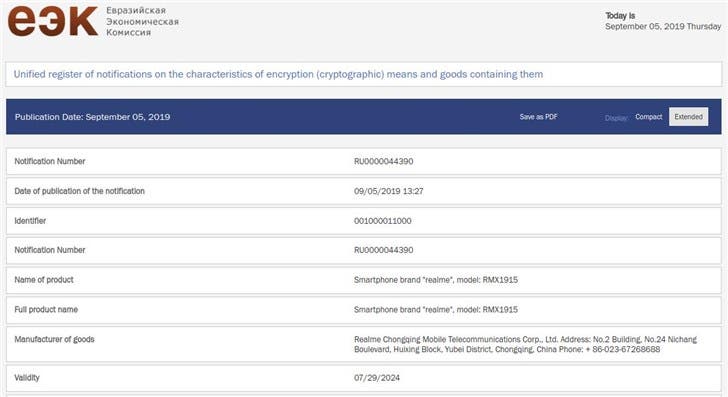 The very first smartphone from Realmi with the “i” is the Realme 3i. This smartphone comes with a diamond-cut design. The phone measures 156.1 x 75.6 x 8.3 mm and weighs 175 grams. It has three colors: diamond black, diamond blue and diamond red. The Realme 3i features a 6.2-inch drop screen and is equipped with MediaTek Helio P60 eight-core chip. In addition, this device boasts of 4GB of RAM and 64GB of internal storage which is expandable up to 256GB. In the camera department, Realme 3i offers a 13MP main camera and a 2MP depth sensor. On the front of the phone, there is another 13MP sensor. From the Realme 3i configuration, Realme 5i may also be a lower version of the Realme 5.

Unfortunately, EEC certifications do not reveal details about the devices. As of now, nothing regarding the Realme RMX1915  is known.

Next Qualcomm and Samsung Attack Huawei, But It Still Stands On Its Own Two Feet