Looks like the Xiaomi Mi 9 Lite is heading for an imminent launch. The device earlier this month appeared on the list of Google’s certified Android devices. The device as at then was rumored to be a variant of the Xiaomi CC9  as they both shared the same “pyxis” codename.’

Corroborating the report, the Xiaomi Mi 9 Lite has now been certified by Thailand’s NBTC, suggesting it is heading for an imminent launch. The NBTC identified the device by the model number M1904F3BG, and while it hasn’t revealed much in terms of specs, the listing quite makes it clear the device will launch as the Xiaomi Mi 9 Lite. 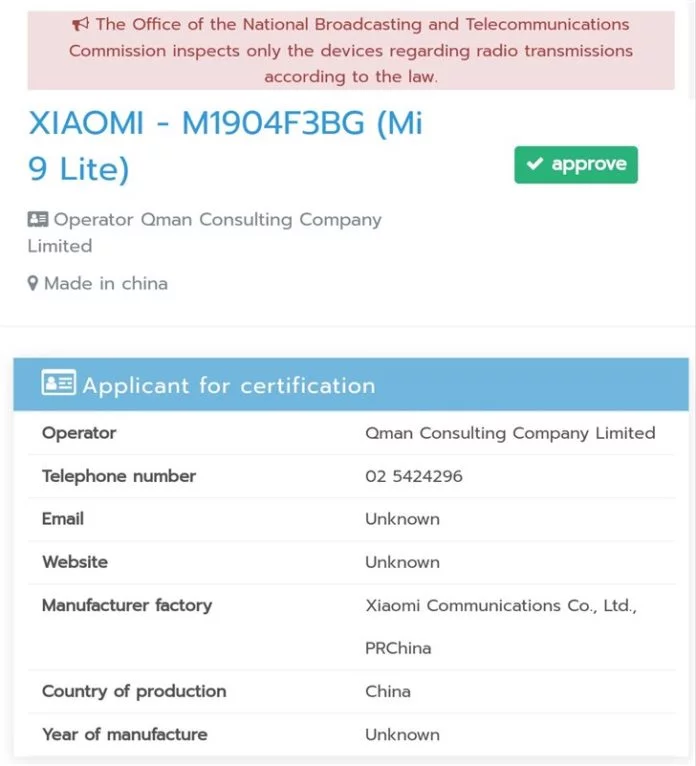 Xiaomi already released the Mi CC9e as the Mi A3, in some market, and was rumored to release the Mi CC9 in international markets as the M A3 Pro. That may not be the case, as the newly certified Xiaomi Mi9 Lite bear similar model number as the Mi CC9. So it is plausible the Xiaomi Mi 9 Lite is a rebadged CC9, though there are still chances the Mi A3 might still get a pro variant in the coming months.

Speaking of the Xiaomi Mi CC9 / Mi9 Lite, the device launched earlier this year in China alongside the Mi CC9e, and the CC9 Meitu custom edition. It comes fitted with a 6.39in AMOLED display while it is powered by the Snapdragon 710. You can get the device in 6GB of RAM + 64GB option, while it packs a 48Mp + 8Mp + 2Mp triple-lens camera, a 32Mp selfie camera, an in-display fingerprint sensor and a 4,030mAh battery with 18W fast charging.

We will update as soon as we get some confirmation regarding the Mi 9 Lite launch.