Realme is working on yet another budget flagship smartphone dubbed Realme X2. As the name suggests, the smartphone is the follow up of the previously launched Realme X. Considering the recent developments, we are already aware of the fact that Realme X2 will feature a  64MP quad-camera setup and a 32MP selfie shooter. Well, we now have the information on the processor that this device is going to rock. For those who’re unaware, Realme X2 will go, official, later this month, 24 September to be precise. 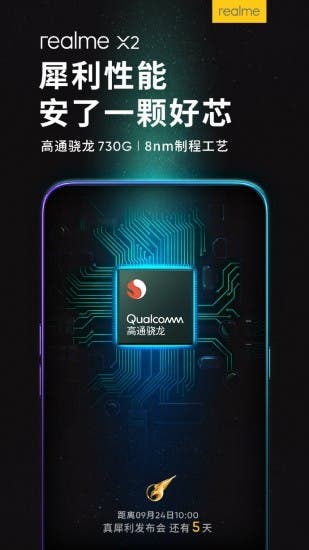 Since the last couple of days, Realme is actively promoting its yet-to-be-launched Realme X2 smartphone on its official Weibo account. Earlier today, the smartphone maker posted a promotional material revealing another key aspect of the device. This time we’re looking at the processor that this device will run underneath. As you can see from the poster, Realme X2 will run on the Qualcomm Snapdragon 730G chipset platform. The SD 730G chipset is based on the 8nm manufacturing processor and comes with eight Kryo 470 cores. For graphics, the chipset makes use of Adreno 618 GPU.

Apart from this, Oppo’s sub-brand Realme has also teased the Realme X2 design by posting an image. Surprisingly, the smartphone looks pretty much similar to the Realme XT which was announced a few days ago in India. Furthermore, the smartphone will arrive in two different color options namely Pearl White and Pearl Blue. Additionally, there have been various reports suggesting the X2 is nothing but a re-branded XT 730G which will hit the Indian shores later in December.

Considering the fact that Realme X2 is a rebranded XT 730G, the smartphone should come with 6.4-inch Super AMOLED display with a resolution of 2340×1080 pixels. Under the hood, the device runs on the Snapdragon 730G chipset paired with Adreno 618GPU. In terms of imaging, there is a quad-camera setup at the back with the primary sensor being a 64MP lens. As of now, there is no information on the rest of the three sensors. For selfies, there is a 32MP front snapper which is an upgrade over the original XT that features 16MP selfie shooter. All of these will be backed by a 4000mAh battery packed inside. Since the official launch is nearing, we might see more information surfacing on the internet in the coming days.