The Xiaomi Mi MIX Alpha, which we reffered to earlier as the Mi MIX 4, will be unveiled on Tuesday. And there couldn’t be a more secretive device in the whole of 2019 than this new MIX iteration. Whatever Xiaomi has in store, it looks to be a unique exciting concept that the company doesn’t want ruined and it has done an excellent job on this. However, a leaked internal PPT has come up that shows us the wrap-around display teased in Xiaomi’s last official teaser. 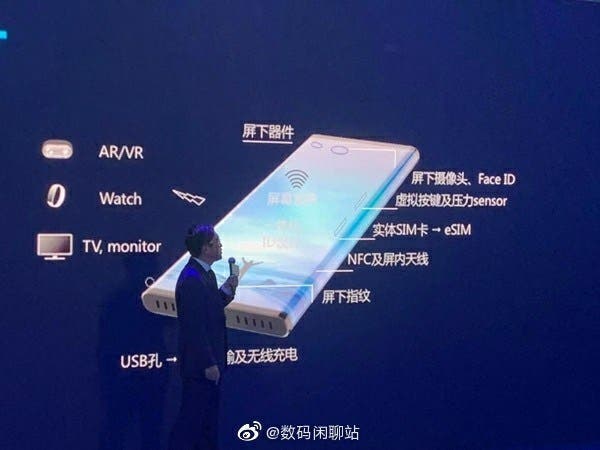 This image is probably from a launch presentation excersie and shows how the curved display curves all the way to the back. Now, this still doesn’t reveal the rear of the phone but shows some features such as a Face ID substitute, an eSIM feature, and an NFC. Unofficial renders imagine this super-curved display to stretch to the full rear making a second screen but leaving space for the rear cameras. This also means that Xiaomi’s foldable phone is still not ready for a release although XDA initally broke a story about four 108MP camera handsets. And since the 108MP sensor is likely to be on the MIX 4 (MIX Alpha), we deduce there could be more than one model. Also, talk around Chinese watercoolers is that this particular design is a concept and may be produced in very limited quantities. If that is the actual case, we can just forget it’s India launch altogether.