Only a couple of months after it first launched the Realme 5 series, indications have now emerged the brand might be updating its smartphone line up soon. While the Realme 6 ordinarily should be the follow up to the recently released Realme 5, it looks like there are plans to bring a mild refresh to the Realme 5 series. It is definitely not coming as a surprise,  a Realme 5s is in the offing according to two different documents from India and Thailand.

In India, the brand has secured approval for a Realme smartphone with the  RMX1925 model number. And while no specific name is attached to it over in India, the same device has been approved/certified ( by the National Broadcasting and Telecommunications Commission (NBTC) agency) in Thailand where we are told it will be marketed as the Realme 5s. 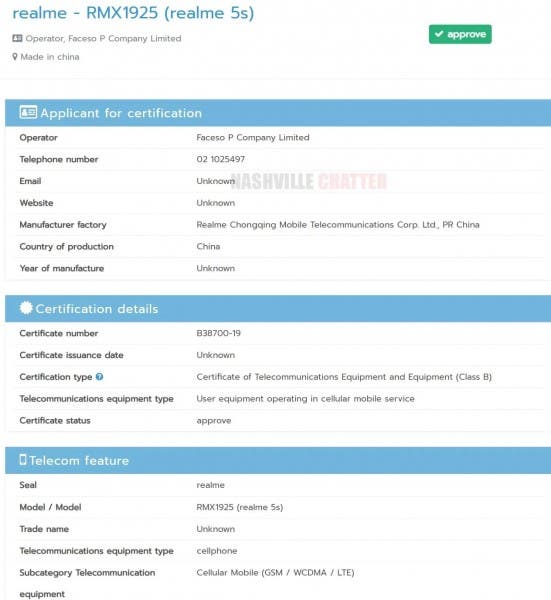 Nothing in the way of specs has been revealed, but we can assume the Realme 5s will be unveiled as a cheaper variant of the Realme 5, perhaps with some downgrades. We also do not have any information as to the Realme5s launch date. But Realme already says it will be launching the Realme X2 Pro in India come November 20th. And aside from the X2 Pro, the company says there are surprise announcements on the said date. Perhaps, the Realme 5s could be one of those surprises.

Previous Android 10-based One UI 2.0 beta is coming for Galaxy Note 10 in the US and Germany