Chinese manufacturing giant, Xiaomi, will release the first mass-produced 108MP smartphone on November 5 in China. Over the past few days, there have been a series of confirmations regarding the upcoming Xiaomi CC9 Pro. As of now, there is technically nothing left to report as its recent TENAA listing confirmed most of its specs. However, a new video teaser from Xiaomi shows that the company is quite proud of the 108MP “telescopic view”. The video shows that even from 5m away, this camera can capture written words after 50x zoom.

What We Already Know About the Xiaomi CC9 Pro

The Xiaomi CC9 Pro will come with a curved 6.47-inch OLED display with Full HD+ resolution. The unknown octa-core processor clocks 2.2 GHz. According to Geekbench, this SoC could be SD730G. In terms of memory, the Xiaomi Mi CC9 Pro has a base variant with 6GB RAM + 64GB storage,  8GB RAM + 128GB storage variant, and a top-end version with 12GB RAM + 256GB storage. Its lights will be kept on with a 5170mAh battery, obviously with fast charging capability. This smartphone will also come with an in-display fingerprint sensor, dual-frequency GPS, and an IR blaster. The colour options include Black, Red, Blue, Pink, White, Green, Purple, and Gray color options. 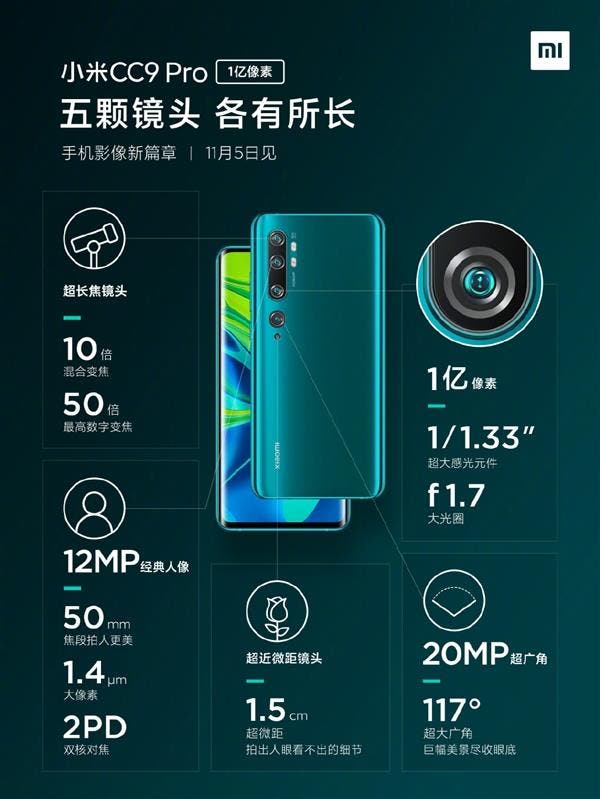 This smartphone uses Xiaomi and Samsung’s customized 108MP ISOCELL HMX CMOS sensor. It is the world’s first large-size dynamic image sensor with a 1/1.33 inch photosensitive area, which can be used in low light conditions. It captures more light than other small sensors.  Xiaomi official said that this smartphone may be the first mass-produced 108MP phone. In addition to the 108MP sensor, the Xiaomi CC9 Pro will also adopt a five-camera solution.  The five sensors include a super-telephoto lens + 12 MP sensor + a 1.5cm macro lens + a 20MP super wide-angle lens + a 108MP main camera. 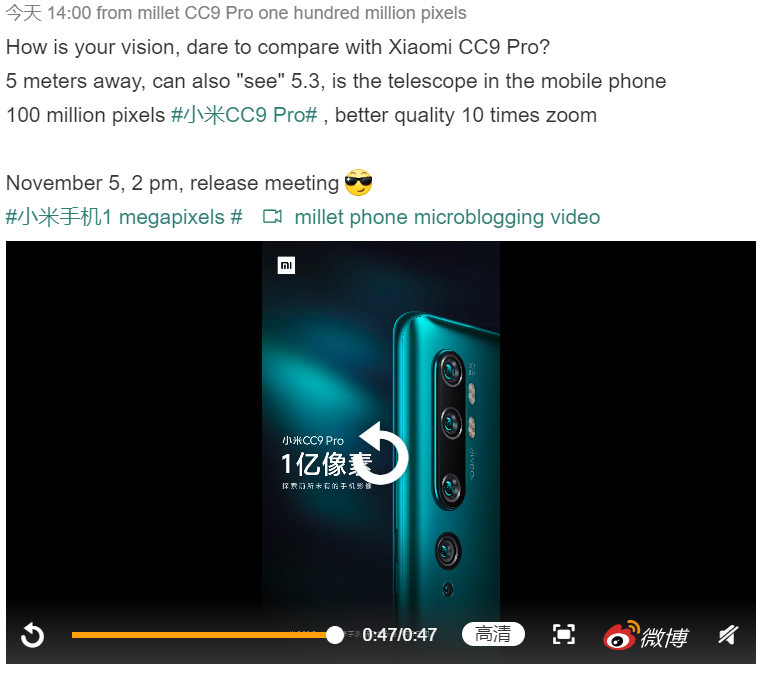 According to Xiaomi, the hardware cost of the Xiaomi CC9 Pro is very high. The cost of the camera module alone is five times that of the previous generation CC9. Having considered the specs and features of this smartphone, experts believe that it will not cost less than 3000 yuan ($425). The 108MP sensor output images with a resolution of 10000 x 11852 and the size per image easily exceed 20MB. For selfies, the device uses a 32MP snapper.