Earlier this year, Samsung introduced a brand new Galaxy M-lineup in India to tackle the increasing domination by Chinese companies. The Samsung Galaxy M series is the new budget lineup from the brand which competes with the likes of Xiaomi and Realme. The lineup already consists of six affordable smartphones and it seems like the company is now planning to introduce more to the roster. Well, we’re now looking at the refreshed Galaxy M devices. 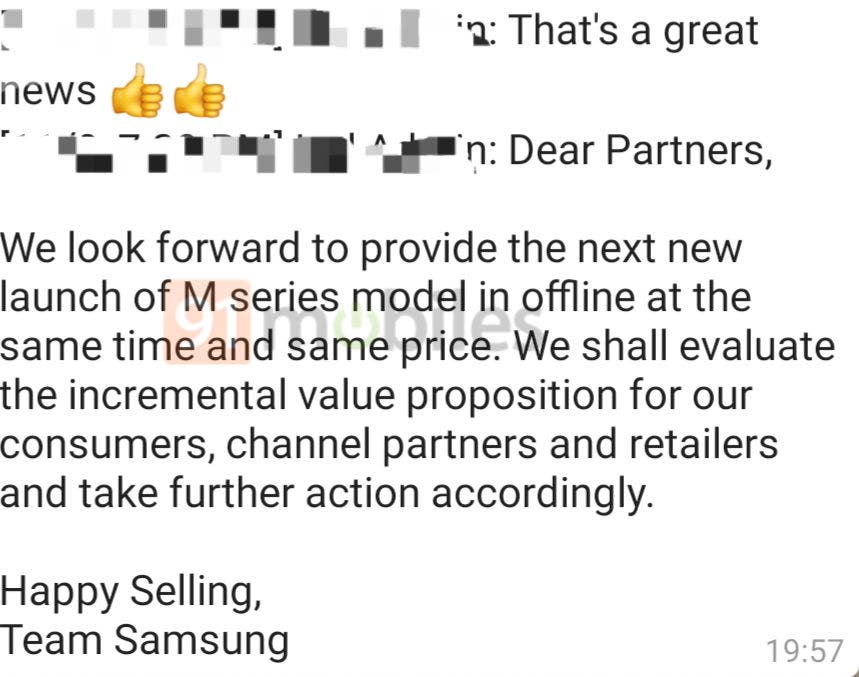 If the recent report is to be believed, Samsung is planning to launch the new Galaxy M50 in the country. The folks at the 91Mobiles were able to get their hands on the recent brand notification to the retail partners. As you can see from the image above, the leaked information talks about the upcoming Galaxy smartphone which should launch anytime soon. Although the image doesn’t reveal the smartphone moniker, a person associated with Samsung mobiles has revealed the device name. As the name suggests, the Galaxy M50 is going to be a successor of the previously launched Galaxy M40.

Coming to the expected launch date, the device might see its official unveiling on November 15. Furthermore, the refreshed Galaxy M devices will be available in offline markets as well. If you’re unaware, the Galaxy M lineup initially was limited to the online e-commerce platforms only. The six affordable devices soon made its way to the retail stores for a slightly increased price tag. Surprisingly, this time we might see the devices hitting offline stores at the same time with the same price tag.

Since this is the first time the Galaxy M50 leak surfaced online, the specifications and features of the product remain unknown. On the contrary, the launch seems to be around the corner meaning we might see more information appearing online. Considering the fact that Galaxy M50 is an upgrade over M40, the device should come with much better internals. To recall, Samsung Galaxy M40 features a 6.3-inch punch-hole display. The device runs on the Snapdragon 675 with up to 6GB RAM and up to 128GB storage. There is a rear triple 32MP+8MP+5MP camera module along with a single 16MP selfie shooter. The device is fueled by a 3,500mAh battery packed inside.

Previous Android: 49 apps contaminated by a malware found in the Play Store