Back in July, Chinese manufacturing giant, Xiaomi, released the first smartphone of the CC series – Xiaomi CC9. At the time, this smartphone runs on MIUI 10 on top of Android 9 Pie. Now, this smartphone is currently receiving the latest Android 10 beta update. The update is designated MIUI 11 9.11.12 and it weighs 2.3GB. 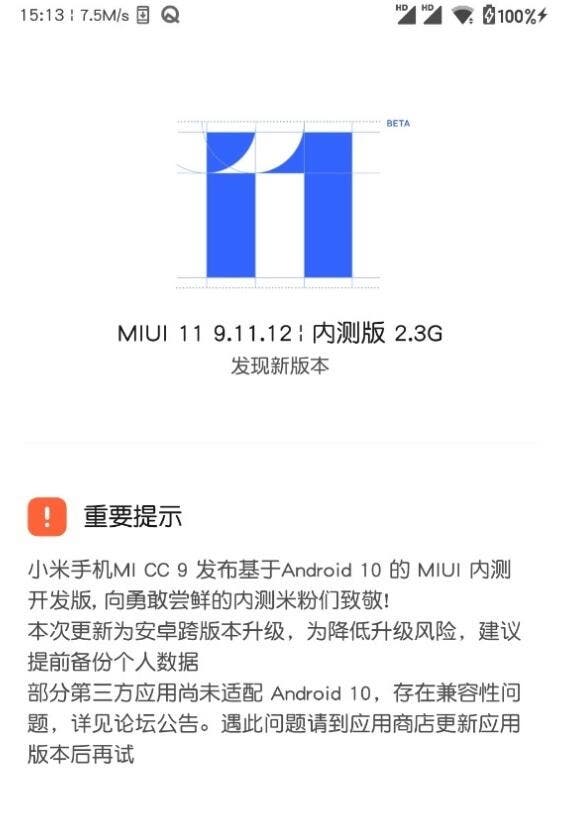 The Xiaomi CC9 comes with a 6.39-inch Samsung custom AMOLED display similar to that of the Xiaomi Mi 9. It has a 91% ultra-high screen ratio and adopts the seventh generation on-screen fingerprint sensor.

Under the hood, the Xiaomi CC9 has a Qualcomm Snapdragon 710 SoC with 6GB of RAM and up to 128GB of internal storage. This smartphone supports Game Turbo 2.0 in addition to the colourful intermittent lights. In the camera department, we have a triple rear camera setup. It uses the same 48MP main sensor as the Xiaomi Mi 9. Upfront, there is a 32MP sensor that supports face beauty.

In other respects, the Xiaomi CC9 has a built-in 4030mAh large battery as well as a standard 18W charger. According to the company, it can give 43% in half an hour. Other features of this smartphone include NFC, infrared remote control, and Hi-Res HD audio. This smartphone has a 1799 yuan ($256) starting price.