Something very weird is happening in Apple’s headquarters, or at least on the department behind the brand’s website. According to a report from AppleInsider a reader noticed that Apple removed its “Ratings & Reviews” tab from all its product listings. Curiously, the user’s reviews and ratings were removed from all items listed on Apple’s website in the US, UK, and Australia. We have three big markets here, so we can assume that the removal was intentional. Apparently the company can’t “trust” in these clients anymore. 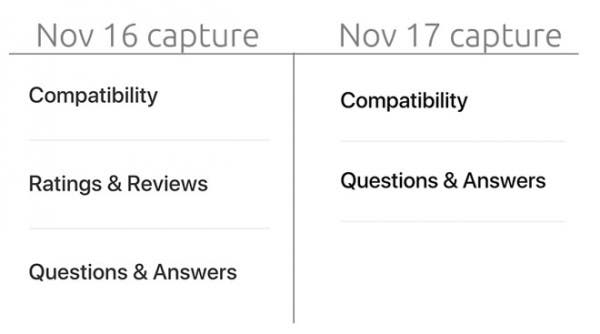 Interestingly enough, after digging through archived versions of Apple’s website seems that the change became effective back in November 17. Curiously, that was two days after the release of the 16-inch MacBook Pro. Is this just a coincidence or an intentional move to avoid negative reviews on the recently released product?

That’s a bad move from Apple, at least when it comes to transparency. After all, providing reviews from users is a good way to show how confident they are in their products. Also, it allows users to know more about a specific product from other customers who have already experienced it. Now that Reviews and Ratings are gone from Apple’s websites, users will have to rely on the good old internet.

Perhaps this is Apple’s way of fighting against hateful reviews. Apple TV’s original series The Morning Show was recently subject to lots of bad reviews. According to the producer of the show, these hateful reviews are coming from “Apple Haters” and shouldn’t be considered. We don’t know if removing all chances of reviewing a product is a good way to combat trolls.

Previous Oppo M1 could be the company's first mobile chipset

Next Huawei: The world is benefiting from China's 5G development